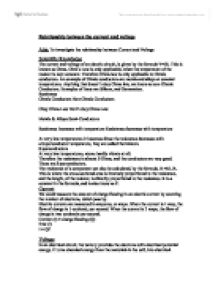 Relationship between the current and voltage.

Relationship between the current and voltage

Aim: To investigate the relationship between Current and Voltage

The current and voltage of an electric circuit, is given by the formula V=IR. This is known as Ohms. Ohm´s Law is only applicable, when the temperature of the resistor is kept constant. Therefore Ohms law is only applicable to Ohmic conductors. An example of Ohmic conductors are metals and alloys at constant temperatures. Anything that doesn´t obey Ohms law, are know as non-Ohmic Conductors. Examples of these are Silicon, and Germanium.

At very low temperatures it becomes Since the resistance decreases with
a Superconductor temperature, they are called thermistors

Superconductors
At very low temperatures, atoms hardly vibrate at all.
Therefore the resistance is almost 0 Ohms, and the conductors are very good.
These are Superconductors.

The lux meter will be surrounded by cardboard, so that outside light is omitted. If a reading is evident on the luxmeter, I will just deduct it from the percentages recorded.

Prediction
As the voltage increases, by myself adjusting it using the potentiometer, the current flowing to the circuit will, also vary. If the voltage, increase, then I expect the current to also decrease, and visa versa. This is exactly the same a saying that V is directly proportional to I. As this is the case, I expect a graphs for both the " wire wound resistor," and the "light bulb," to have graphs with a positive gradient.
As the resistance, of the, " wire wound resistor," will be a constant, I expect a straight line graph. There I also expect the resistors to be applicable to ohms law. This is, as the temperature of the resistors will be kept constant, as the voltage will not be very high. For the light bulb, the resistance will vary and will never be constant. As this is the case, I expect a graph with a curve, and positive gradient. The graph will start to curve more, and have a steeper gradient the greater the voltage, and current are. This is due to the bulb resistance, starting to become more constant. As the temperature is not constant, I don´t not expect the light bulb to be applicable to Ohms law.
The relationship between the % of light, and the resistance, I believe would give an S shaped curve. I believe this, as no light will be given off, even though there is some resistance in the circuit.

The highlighted figures, aren’t identical, like the majority of the results I received. This is most probably due to human error. Even though this is the case, it in no means effects the graph and conclusion I have drawn up. These results are fairly constant, and are acceptable.
If was to do this experiment again, I would make some alterations to the method. First of all, I would use an ammeter, which measures in Millie-amps, as this would give a more accurate reading of the current. This is why I feel that when the calculations that were done for the conclusion, that the resistances received were not exactly 1 ohm and 2 ohms.
I would also use a more rigid, and opaque, box, to cover the luxmeter. This will there for allow the out side light to be 0 %, giving more accurate readings. The box I used, was not totally acceptable, as it may have had slits in it which could let light through, which could have effected our readings. If the box were also lined with black paper, it would be an improvement, as any light not from the bulb would be absorbed. We used a light coloured box, which would have effectively reflected light from out side around the box. The experiment could also be carried out in a dark room, so that there is absolutely no chance of light from out side effecting the readings on the luxmeter.