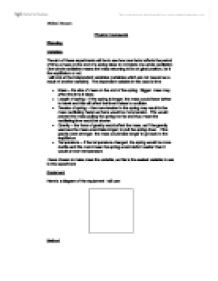 See how one factor affects the period of time a mass on the end of a spring takes to complete one whole oscillation.

The aim of these experiments will be to see how one factor affects the period of time a mass on the end of a spring takes to complete one whole oscillation.  One whole oscillation means the mass returning to its original position, be it the equilibrium or not.

I think that as I increase the mass on the end of the spring, the time for it to complete one oscillation will increase.  This is because of the equation F = ma, which states that the force is equal to mass times acceleration.  As I am keeping my initial displacement constant, all forces acting on the spring are constant.  This means as the force will stay the same in each

We had just one anomalous result, and this was at 700g.  An anomalous result is one that doesn’t fit the pattern, or lie on the curve of best fit.  The most likely reason for this is a slight inaccuracy in measuring.  We can see on the graph that it is not far from where it should have been so no major error took place.  The majority of reasons are down to human error, such as inaccurate measuring or timing.  The spring itself could’ve been the reason if it is not quite the same as the others.  It could’ve been used more than the others, which could affect the timings.

Changes to the Experiment

If I were to re-do this experiment, I would make some changes to it.  One of these would be to use a more accurate way of measuring the distances and times.  This would eliminate many errors and inaccuracies, especially with the timing, which is all down to the judgment and reactions of the timer.

In order to further investigate further there are many experiments I could do.  One I could do is see if ductility affected the time, by heating up springs to different temperatures and keeping forces and mass constant, making temperature the only independent variable.

The candidate has carried out a well-planned experiment to measure how changing the mass of a spring oscillator affects the time of oscillation. They have produced a well-presented written report. However, they have failed to have explicitly answered the question ...

The candidate has carried out a well-planned experiment to measure how changing the mass of a spring oscillator affects the time of oscillation. They have produced a well-presented written report. However, they have failed to have explicitly answered the question in the form of a clearly-stated conclusion, and instead gone off topic by discussing the kinetic energy of the oscillating mass, which has very little relevance to the original question.

The candidate has used the results of the experiment to calculate the average speed and kinetic energy of the oscillating mass. They have also analysed the results to identify an outlier, and discussed a potential cause for the outlying value. They used the results of their preliminary experiment well, in order to chose the best range to test the spring over without exceeding its elastic limit. However, it may have been better to instead find the limit of proportionality in order to only test the springs while they obeyed Hooke's Law, as this will have affected their results. Despite this, they have still managed to pick a suitable range of masses, and justified their decision well.
When planning the experiment, they have shown evidence of attempting to reduce the uncertainties, although it would have been better to use the heading 'reducing uncertainties' rather than 'fair testing'. Also, within this section, they decided to use different springs for each experiment. It is usually best to use the same spring as each spring will have a slightly different stiffness, and is unlikely to be affected by previous use unless stretched beyond its elastic limit (which was found in the preliminary experiment).
The candidate has shown evidence of strong logical reasoning and scientific understanding, particularly in their detailed explanation of their hypothesis - in which they described Newton's second Law and how it can be used to predict that the acceleration would decrease as the mass increases. They then carried out the experiment to demonstrate this relationship.

Their quality of written communication is very good, and the report is presented well, in a logical order, with suitable sub-headings, tables, and a formal tone. The use of bullet point is also good as it makes the report much easier to read and be marked. There are no noticeable grammatical or spelling errors. Occasionally they have said things such as "I have chosen to make mass the variable, as this is the easiest variable to use in this experiment." This is not I good idea as it suggests they are being lazy - it is much better not to mention why they chose this - the examiner will just assume you could only pick one variable and just happened to pick mass - you don't need a good excuse!
They could also gone into a little more depth in some sections, for example giving suggestions for better measuring equipment they would have preferred to use.
Despite these small errors, the report reads well and their quality of written communication is very good.