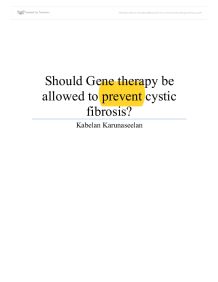 Should Gene therapy be allowed to prevent cystic fibrosis?

Should Gene therapy be allowed to prevent cystic fibrosis? "Every week on average five babies are born every week with cystic fibrosis, and 3 sufferers die from it, usually caused by the damage to the lungs"1. CF is a life threatening disease that cannot be cured with the current treatments. The treatments include exercise, dietary programs, inhalation of antibiotics; breathing control techniques and daily physiotherapy. The initial cause of cystic fibrosis has been agreed by many sources such as www.cftrust.org.uk to be the single faulty gene that controls the movement of salt in the body resulting in the growth of internal organ's becoming clogged with thick sticky mucus. Problem: Although the methods mentioned above increase life span, they only target specific symptoms, rather than curing the defect itself, on the other hand, gene therapy is undergoing research, in both clinical and laboratory to see if it is safe and effective. "Only 33% of clinical trials have been focussed on 'single gene' diseases, and one of them is the common cystic fibrosis."15 The other 67% is clinical trials of gene therapy in humans have been cancer treatments. So treating gene therapy with cystic fibrosis is something which will have to be taken into consideration, but the technique gene therapy is always going under thorough research. Here are few reasons why gene therapy will not be able to prevent Cystic Fibrosis: * Firstly Gene therapy has a short lived nature, the DNA that is introduced into the target cells must remain functional and the cells containing the DNA must be long-lived and stable. ...read more.

If the treatment is successful, the new gene will then make a functioning protein to control the salt levels, and clear mucus effectively. This is all good, but I suspect there is much more risk, to future generations. The whole concept is incredible, but there are many opposing views and the safety of the concept has not yet been fully researched yet. Solutions: According to the Clinical research centre at Inha University "Retroviral vectors have been the most preferred gene transfer system due to its well understood biology"6. They have reviewed safety features of the vectors for gene theraphy and have also tried different methods of transferring to increase the effectiveness of the gene. Possible solutions were: targeted infection, which involves infecting target cells by retroviruses initiated by binding of the viral envelope protein to cell surface receptors. Another possible solution is local delivery which is much safer in terms of long term side effects. Targeting retroviral integration involves entering the host cell, a single-stranded viral RNA genome which has been released into the cytoplasm and converted into a double stranded DNA, then forming a large nucleoprotein structure, containing proteins necessary for localisation and insertion of viral DNA into the host genome. A much newer but developing method is "Co-expression of a Suicidal Gene"6, which used the above Herpes Simplex vector. The above transfer methods have been successful in transferring the vector, these methods were first performed on rats at the Clinical Centre, and then after the rat had passed safe health checks the method was performed on humans and was successful and much effective. ...read more.

This is called bactofection. "This technique has only been around for 25 years but is improving with more research and clinical trials."16 The bacterial strains deliver genes localized in plasmids in the cells. The transfer delivery process involves intracellular localization of the bacteria. Plasmids contain the sequence required for the transcription and translation of the transferred genes. The main problem with bacterification has its downsides like gene therapy, in this case unwanted side effects related to the host-bacteria interactions. The strains used contain a suicide gene which is an advantage in bacterification because the bacterium self-destructs itself. During the destruction of vectors, plasmids and vectors are released into the nucleus. Jumping gene, a Non-viral Alternative Researchers are saying this is a much safer, target-specific alternative to viruses in gene therapy. "PiggBac transposon"20 is a jumping gene which has close relatives in the human genome. "Piggyback transposon was five to 10 times better than the other circular pieces of DNA."20 For example, if we wanted to add a therapeutic gene, they would put the transposon with the gene and use it to deliver the gene into the cell. Scientist have used virus for the past 20 years for the gene delivery mechanism. But according Dr Kaminski, efficiency comes at a price. Mr Dr.Kaminski said "with viruses, you don't have control"20 (source). This has proved to be a much better technique with a non-viral alternative, because gene therapy has been halted because of major complications, including deaths. So using a non-viral alternative is more effective and also much safer. ...read more.

*** A reasonable A level report, which outlines how gene therapy can be used to treat genetic diseases such as cystic fibrosis. A basic explanation of how gene therapy treats cystic fibrosis is included, but the report does not contain sufficient biological detail for an A-level report. Several distinct biological techniques are also incorrectly discussed as 'gene therapy'. To improve:
1)Discuss the technique of gene therapy in A-level detail at the start of the report, explaining its uses
2)Ensure that techniques such as genetic screening and stem cell therapy are not discussed as gene therapy. They are different techniques
3)Include a scientific journal article and reference using standard formatting
4)Evaluate sources based on the data they include, where it comes from, the institution that has published it or the reputation of the scientists who completed it