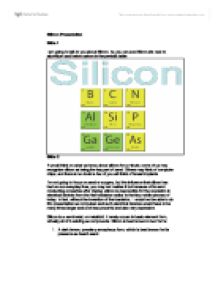 I am going to talk to you about Silicon. As you can see Silicon sits next to aluminium and below carbon in the periodic table. 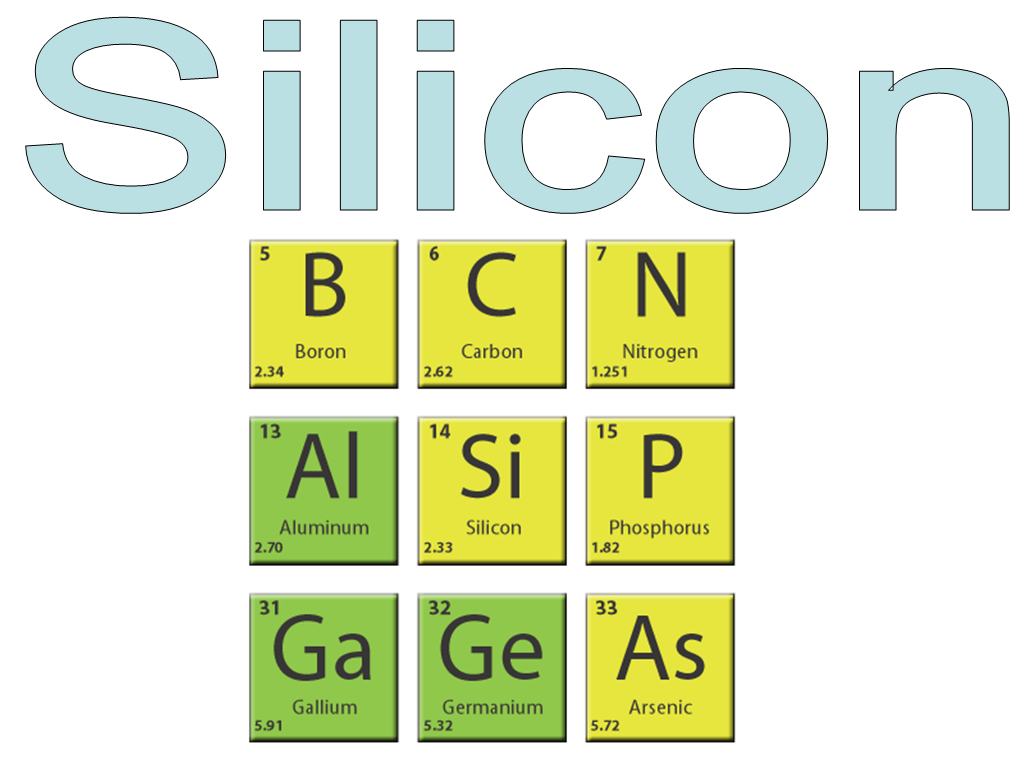 If we all think on what we know about silicon for a minute, some of us may recognize silicon as being the key part of sand. Others may think of computer chips; and there is no doubt a few of you will think of breast implants.

I’m not going to focus on sand or surgery, but the influence that silicon has had on our everyday lives, you may not realise it but because of its semi conducting properties after doping, silicon is responsible for the revolution in electrical devices from the first transistor radios to the tiny mobile phones of today. In fact, without the invention of the transistor, I would not be able to do this presentation as computers and such electrical devices would have to be many times larger and a lot less powerful and also very expensive.

Silicon is a semimetal, or metalloid. It rarely occurs in basic element form, virtually all of it existing as compounds. Silicon is best known in two forms:

- It is a refractory material used in high-temperature material production and its silicates are used in making enamels and pottery. Steel - Silicon is an important constituent of some steels. Glass - Silica from sand is a principal component of glass. Glass can be made into a great variety of shapes and is used to make window glass, containers, and insulators, among many other uses. Abrasives - Silicon carbide is one of the most important abrasives. Semiconductor - Ultrapure silicon can be doped with arsenic, boron, gallium, or phosphorus to make silicon more conductive for use in transistors, solar cells and other semiconductor devices which are used in electronics and other high-tech applications. Photonics - Silicon can be used in lasers to produce coherent light with a wavelength of 456 nm. Medical materials - Silicones are flexible compounds containing silicon-oxygen and silicon-carbon bonds; they are widely used in applications such as artificial breast implants and contact lenses. LCDs and solar cells - Hydrogenated amorphous silicon has shown promise in the production of low-cost, large-area electronics in applications such as LCDs. It has also shown promise for large-area, low-cost solar cells. Construction - Silica is a major ingredient in bricks because of its low chemical activity. 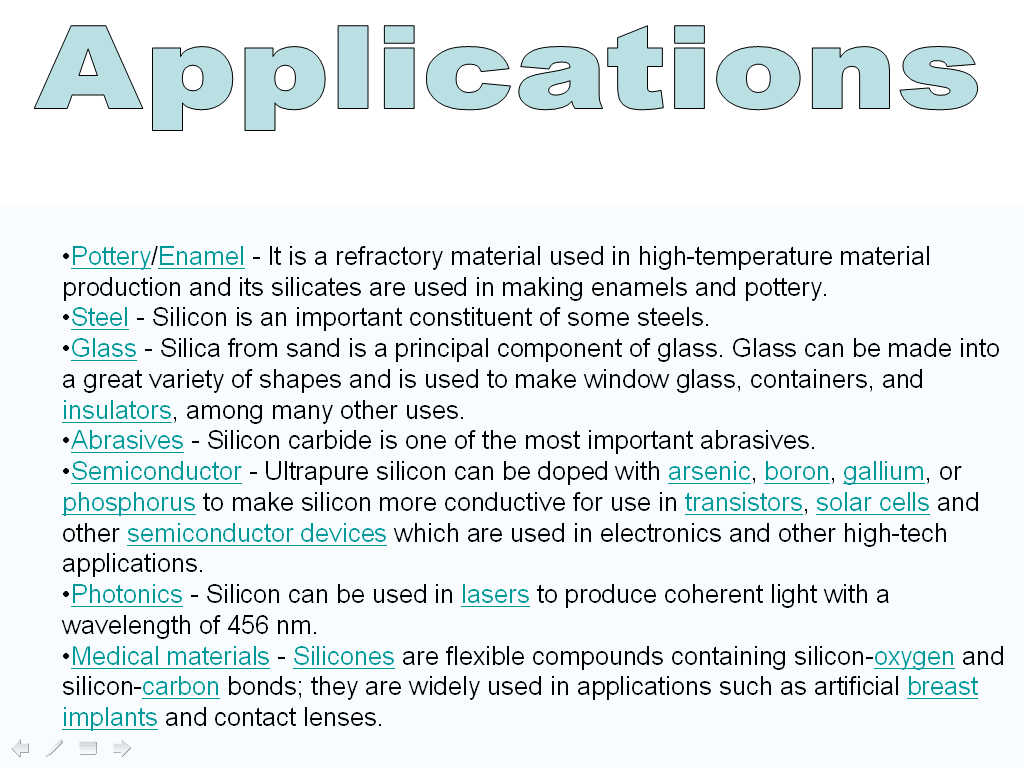 Silicon (Latin silex, silicis meaning flint) was first identified by Antoine Lavoisier in 1787, and was later mistaken by Humphry Davy in 1800 for a compound. In 1811Gay Lussac and Thénard

If current miniaturisation trends continue, the projected layer thickness by 2012 will be less than one nanometre - that is just five silicon atoms.
Scientists have shown that four silicon atoms is the fundamental lower limit for a useable gate devices and that reaching that limit is just over a decade away.

To summarize, you can pack a lot of stuff in a silicon chip, but there is a limit to it.The more stuff you put, faster your computer will be.But a time will come when the chip is full.You can ofcourse increase the size of a chip to put in more stuff, but that is not a viable solution.

But perhaps in the drive to build faster, more powerful and smaller computers we will turn to biological molecules and harness the power of DNA rather than try to push electrons along arcades of silicon atoms.This technique is still under research, and dwells on DNA to do all the computing works.
Thus, ultimately we might have to turn away from silicon,not for the lack of it,but for the limit imposed by moores law. 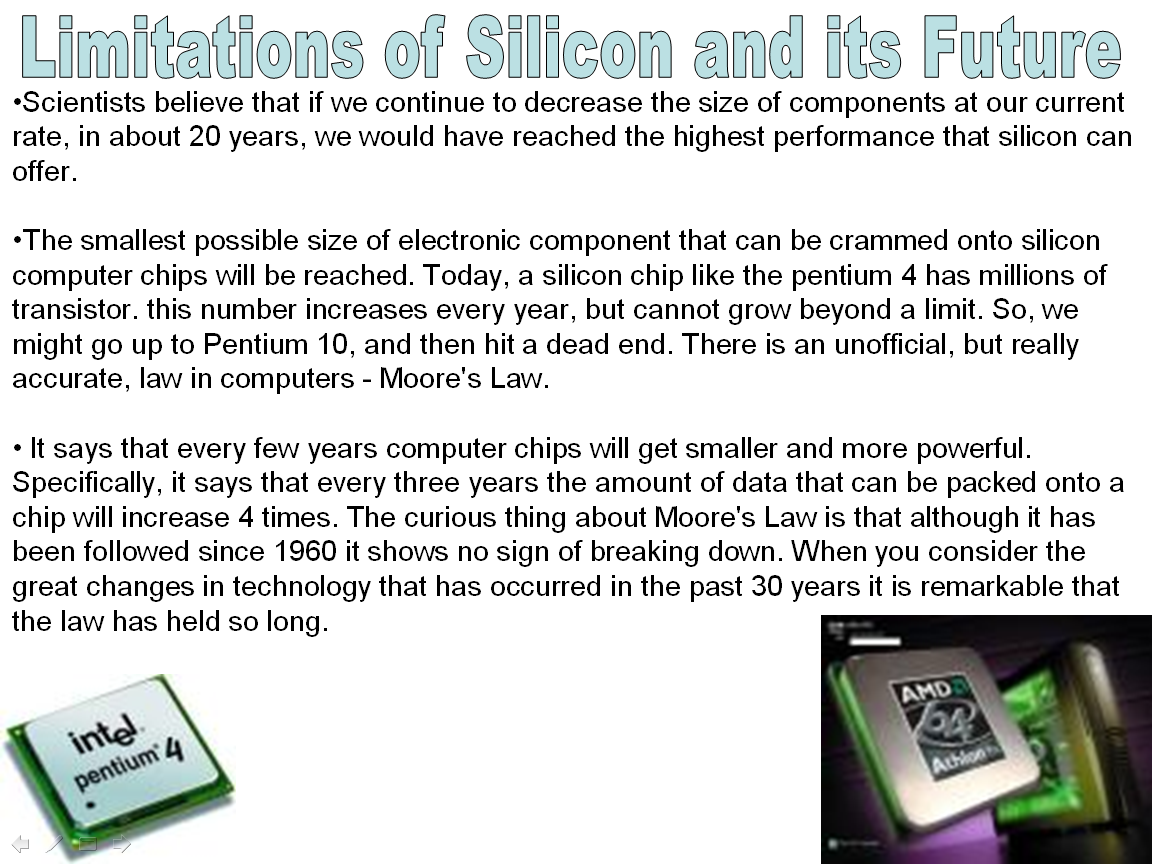 The natural progression from silicon to doped silicon to transistors to chips is what has made microprocessors and other electronic devices so inexpensive and ubiquitous in today's society. The fundamental principles are surprisingly simple. The miracle is the constant refinement of those principles to the point where, today, tens of millions of transistors can be inexpensively formed onto a single chip. 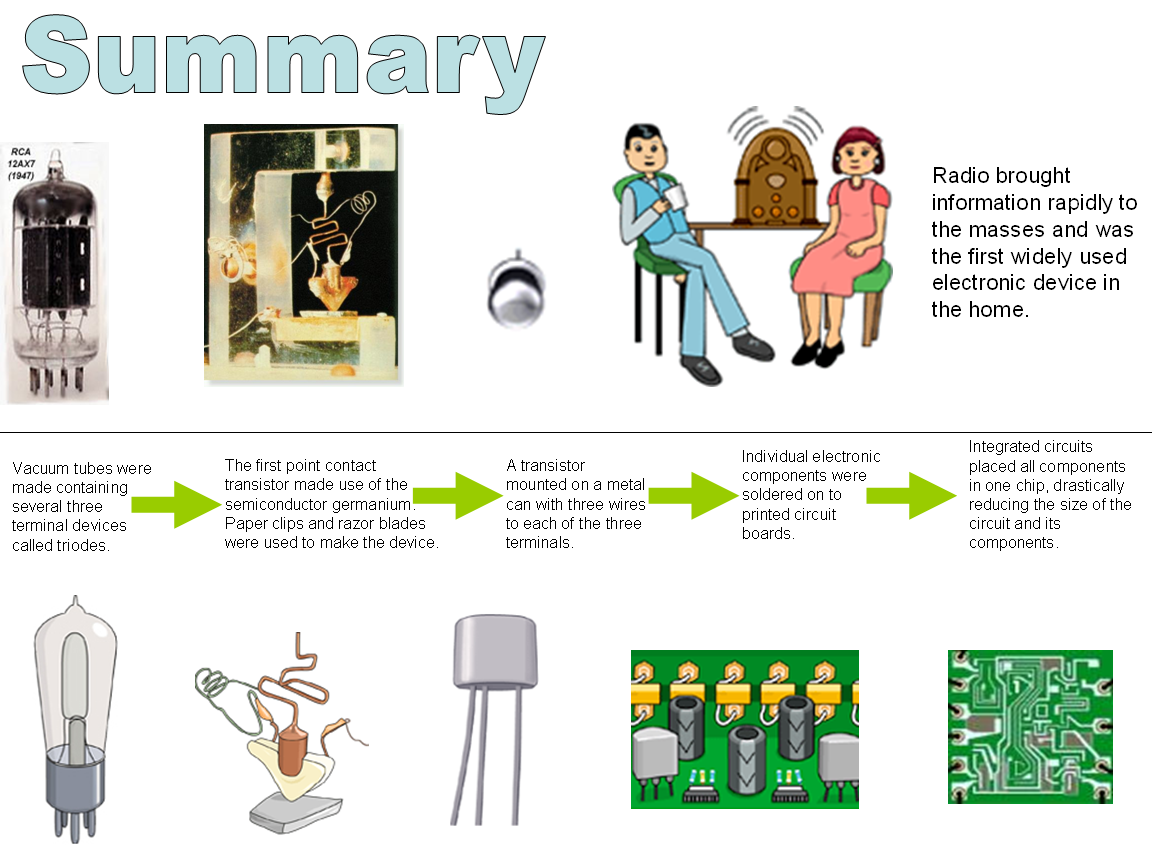