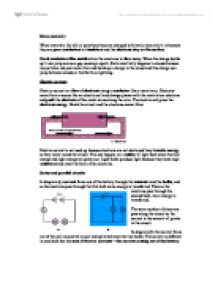 When materials like silk or polythene become charged with static electricity it is because they are poor conductors or insulators and the electrons stay on the surface.

Good conductors like metals allow the electrons to flow away. When the charge builds up it can jump across a gap causing a spark. Static electricity happens in clouds because ice particles rub past each other and build up a charge in the cloud and this charge can jump between clouds or the Earth as lightning.

Electric current is a flow of electrons along a conductor like a metal wire. Electrons come from a source like an electric cell and change places with the metal atom electrons and push the

The same number of electrons pass along the circuit so the current is the same at all points in the circuit.

In diagram (b) the current flows out of the cell around the circuit and splits between the two bulbs. The current is different in each bulb but the sum of the two currents = the current coming out of the battery.

magnetic field similar to that produced by a bar magnet. 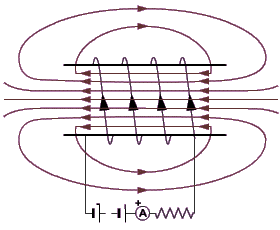 If you put a bar of iron inside the coil, it bahaves like a magnet - but only while the current is flowing. If the current is turned off, the bar stops being magnetic.

What you have now is an electromagnet.

The hammer is connected to a contact, C, and as the hammer moves it breaks the circuit and the electricity stops flowing. The springy metal, E, pulls the hammer back into its

Position. Another useful device using an electromagnet is a relay switch. 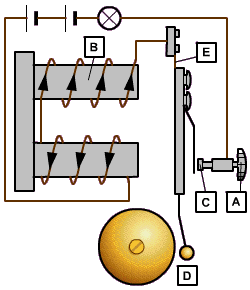