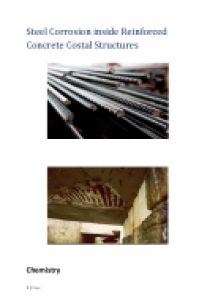 ﻿Steel Corrosion inside Reinforced Concrete Costal Structures Chemistry 2012 ________________ Contents 1.0 Introduction 2.0 Background Information 3.0 Why does Steel corrode in a costal environment? 4.0 Method of Corrosion Prevention 4.1 Epoxy Coating 4.2 Cathodic Protection System 5.0 Conclusion 6.0 Appendix 7.0 Bibliography ________________ 1.0 Introduction Steel has been around since BC times however it has only been with the relatively recent invention of the Bessmer process in the mid-19th century which has turned it into the mass produced, inexpensive material it is today. More than 1.3 billion tons of steel is produced annually (Kolb, 2004 ), it is one of the most common materials in the world being used in everything from buildings and infrastructure to weapons and machines (The Steel Reinforcement Institute of Australia , 2008). Corrosion is a chemical or electrochemical reaction between a material, usually a metal, and its environment which results in deterioration of the material and its properties. For steel embedded in concrete, corrosion occurs mainly in the form of rust which is the oxidization of iron(III). The formation of rust is two to four times the original volume of the steel that has corroded and it maintains none of the good mechanical properties that make it useful as reinforcement (Cadman Inc., 2012). Because of the high pH and relatively low permeability of concrete it provides a passive film of protection from corrosion in most places (The Steel Reinforcement Institute of Australia , 2008). However steel reinforcing that is constantly exposed to aggressive corroding chemicals such as seawater (Chlorides) ...read more.

The concrete must be wet enough or have enough salt content (salt bridge) to provide an electrolytic path to transport ions. Therefore this form of corrosion mostly happens in wet coastal areas. Cathodes do not corrode. This reaction is known as a redox or reduction and oxidization reaction (corrosion-doctors, 2006). Reaction at anode, Iron losing its valance electrons becoming oxidized Fe ï Fe++ + 2e- Reaction at cathode, electrons being absorbed into water and oxygen to make hydroxide O2 + 2H2O + 4e- ï 4OH- (Ltd, 2004) Carbon dioxide from the air can neutralise the alkalinity of concrete by reacting with the lime component of the concrete which gives concretes high alkalinity of about pH 12 (The Steel Reinforcement Institute of Australia , 2008). When the alkalinity drops below pH 10 corrosion can occur but only in the presence of oxygen and moisture, which for costal environments is inevitable. Carbonation in concrete is represented as the following equation. Ca(OH)2 + CO2 ï CaCO3 + H2 (Ltd, 2004) This is known as carbonation, it is a slow and predictable process. It is not the main cause of corrosion in steel and does not create nearly as many problems as chloride induced corrosion. ________________ 4.0 Method of Corrosion Prevention 4.1 Epoxy Coating Although steel reinforcement represents only a fraction of the cost of a concrete structure (about 3-7%), in most cases it is the corrosion and failure of the steel that leads to completely replacing the structure or costly repairs. One method that has been widely used by the construction industry is to epoxy coat the steel to give it a physical barrier between aggressive chemicals which commence the formation of corrosion (National Reasearch Council , 2001). ...read more.

These are the half equations for the reactions occurring. Fe ï Fe2+ + 2e- (EMF=+0.41V) O2 + 2H2O +4e- ï 4OH- (EMF= +0.40V) (Cathodic Protection Co. Limited, 2011) 5.0 Conclusion Steel is an alloy which has a vast variety of applications in construction all over the world and particularly in the concrete industry. It has many favourable properties which makes it perfect for reinforcing concrete however corrosion remains a constant problem in every application of steel. It is an inevitable process in which the Iron try’s to return to its natural oxide state through a redox reaction. Corrosion can be controlled through various prevention methods including epoxy coating and cathodic protection. Through the points discussed in this report it has been concluded that a cathodic protection system is a better choice for costal structures as it can provide continued corrosion protection for as long as desirable. Whereas on the other hand epoxy coatings deteriorate after several years of use (depending on the quality) and then the structure is completely prone to corrosion and will eventually become unusable and beyond economically feasible repair meaning it will have to be knocked down and re-built or if the problem is caught before it is too late a cathodic protection system can be applied in most cases to prevent further corrosion inside the concrete. Hopefully the implementation of more cathodic protection systems to save and protect corroding costal structures will secure the use of steel in the costal construction industry. ________________ 6.0 Appendix To save money, the owner applied cathodic protection to only the bottom floor. The bottom floor ceilings are in excellent condition, but costly patching had to be applied to the upper three floors. Appendix 1 Appendix 2 Appendix 3 Appendix 4 Appendix 5 7. ...read more.