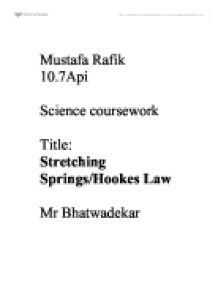 A force is also able to change the motion of the object.

The force, which is applied to the object, makes the object stay in that shape which is the cause of the   force hitting the object and making it change, this will not go back to its original shape like shown in number 2, this is because the particles have been hit so hard that the attraction of the particles which makes them go back to its original shape have been damaged so it will then go into another shape.

This is a material that will stretch and go back to normal, its original shape.

Elastics behavior is the ability of a solid to regain its shape when the external forces are removed.

What is Hookes Law?

Hokes Law is a rule for a spring,

This means that the extension is directly proportional to its force until its elastic limit.

The graph or load against extension is a straight line.  When the load is doubled, the extension doubles, this relationship is known as one of direct proportional.

This result is in agreement with Hookes Law.

Hooke, Robert (1635-1703), English scientist, best known for his study of elasticity. Hooke also made original contributions to many other fields of science.

Hooke was born on the Isle of Wight and educated at the University of Oxford. He served as assistant to the physicist Robert Boyle, and helped Boyle in the construction of the air pump. In 1662 Hooke was appointed curator of experiments of the Royal Society and served in this position until his death. He was elected a Fellow of the Royal Society in 1663 and was appointed Gresham Professor of Geometry at the University of Oxford in 1665. After the Great Fire of London in 1666, he was appointed surveyor of London, and he designed many buildings, including Montague House and Bethlehem Hospital.

Hooke anticipated some of the most important discoveries and inventions of his time but failed to carry many of them through to completion. He formulated the theory of planetary motion as a problem in mechanics, and grasped, but did not develop mathematically, the fundamental theory on which Sir Isaac Newton formulated the law of gravitation. Hooke's most important contributions include the correct formulation of the theory of elasticity, which states that an elastic body stretches in proportion to the force that acts upon it; and analysis of the nature of combustion. He was the first to use the balance spring for the regulation of watches, and he devised improvements in pendulum clocks. Hooke also pioneered in microscopic research and published his observations, which included the discovery of plant cells.

The aim of this investigation is to find out if extension is proportional to the force applied, and

The following are likely to cause errors in my experiment and I could prevent them by-:

-I could measure the length of the spring wrong, to overcome this by using a measuring tape as it is better and easier to get closer and measure, I could also read at eye level to overcome this.

-I could also cover the spring to stop it swinging and to stop stress, and it’ll also stop draughts, which make the spring, swing, this would make it a fair test.

-I could’ve measured the spring from top and bottom and to prevent this by measuring it from the actual coil.

I would’ve been able to draw my graph more precisely if I had more readings and a wider range, it would’ve been better if I had 3 springs because I would’ve done it 3 times and I would’ve got a better average.  I would choose these results with the 3 springs rather than my original ones because it would be better and more accurate with 3 springs.

I used information from Encarta to get information about Robert hooke I also used my science note book and the book science for you.