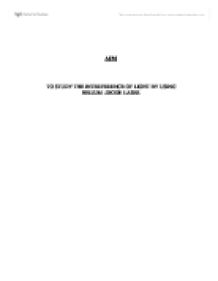 As we see later, light waves from a sodium lamp, for example, are due to energy changes in the sodium atoms.  The emitted waves occur in bursts lasting about second. The light waves produced by the different atoms are out of phase with each other, as they are omitted randomly and rapidly.  We  call such sources of light waves as these atoms incoherent sources on account of the continual change of phase.

Suppose two sources of  light, A, B have exactly the same wavelength and amplitude of vibration, and that their vibration are always in phase with each other, fig.1. The two sources A and B are therefore coherent sources.

λD/d since D and d are constant.

3.       If the source slit S is widened the fringes gradually disappear.  The slit S is then equivalent to a large number of narrow slits, each producing its own fringe system at different places.  The bright and dark fringes of different systems therefore overlap, giving rise to uniform illumination.  It can be show that, to produce interference fringes which are recognizable, the slit width of S must be less than  λD/d, where D is the distance of S from the two slits A, B.

5.        If white light is used, the central fringe is white, and the fringes    either side are coloured.  Blue is the colour nearer to the central fringe and red is farther away.  The path difference to a point O on the perpendicular bisector of the two slits A, B is zero for all colours, and so each colour produces a bright fringe here.  As they overlap, a white fringe is formed.  Farther away from O, in a direction parallel to the slits, the shortest visible wavelengths, blue,

Hence bright interference fringes are formed as detailed below :

The separation between the centers of two consecutive bright fringes is the width of a dark fringe.

Hence, dark interference fringes are formed as detailed below :

Comparison with the above shows that dark interference are situated in between bright interference fringes.  The separation between the centers of two consecutive dark fringes is the width of a bright fringe.

Hence, all bright and dark fringes are of equal width.

Further, at sites of constructive interference,

Hence, all bright interference bands have the same intensity.

At the sites of a destructive interference

all dark bands have the same  intensities.

I would like to extend my gratitude to my physics teachers Mrs. Ritu Sharma and Mrs. Indira Saini who spared their precious time and gave needful advice, without which this project would not have been completed. I am equally grateful to our lab assistant Mr.Deshbandhu for his timely help and guidance.

This is to certify that my student Gaurav Gupta  of Class XII SC A has completed the project titled “To study the interference of light using Helium – Neon Diode Laser”, sincerely and to the best of his efforts.