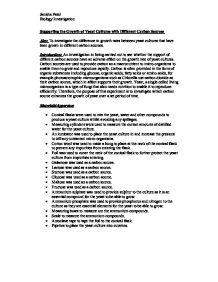 Supporting the growth of Yeast Cultures

Supporting the Growth of Yeast Cultures with Different Carbon Sources

Aim:To investigate the difference in growth rates between yeast cultures that have been grown in different carbon sources.

Introduction: An investigation in being carried out to see whether the support of different carbon sources have an adverse effect on the growth rate of yeast cultures. Carbon sources are used to provide carbon as a macronutrient to micro-organisms to enable them to grow and reproduce rapidly. Carbon is often provided in the form of organic substances including glucose, organic acids, fatty acids or amino acids, for example photoautotrophic microorganisms such as Chlorella use carbon dioxide as their carbon source, which in affect supports their growth. Yeast, a single celled living microorganism is a type of fungi that also needs nutrition to enable it to reproduce efficiently. Therefore, the purpose of this experiment is to investigate which carbon source enhances the growth of yeast over a set period of time.

Firstly, measure 100mls of distilled water in a measuring cylinder and place it in a clean conical flask. Measure 0.5g of ammonium phosphate and add it to the flask. Also measure 0.5g of ammonium sulphate and add it to the solution. Make the solution up to 200mls with distilled water. Label this conical flask as the ‘control’. Make a bung out of cotton wool and place it at the neck of the conical flask. Then cover the top of the conical flask with aluminium foil ensuring that it is not too secure. Tape the foil to the flask with a small length of autoclave tape and label the tape with ‘control’ (this is because the label on the flask may disappear as the condensation in the incubator rises) and leave to one side.

Measure 100mls of distilled water in a measuring cylinder and place it in a clean conical flask. Then measure 4g of galactose in a measuring boat and add to the flask. Then measure 0.5g of ammonium phosphate and add it to the flask. Also measure 0.5g of ammonium sulphate and add it to the solution. Make the solution up to 200mls with distilled water. Label the conical flask as ‘galactose’. Make a bung out of cotton wool and place it at the neck of the conical flask. Then cover the top of the conical flask with aluminium foil ensuring that it is not too secure. Tape the foil to the flask with a small length of autoclave tape and label the tape with ‘galactose’ and leave to one side. Repeat this procedure with all the remaining carbon sources that are going to be tested and ensure that they are labelled correctly on the autoclave tape.

After the yeast have had time to grow and reproduce, transfer 5 drops of the ‘control’ solution into a clean cuvette. Fill the rest of the cuvette with distilled water. Turn the colorimeter on and ensure that the setting is on absorbance at 550 nanometres instead of percentage transmission. Pace the cuvette in the colorimeter correctly, ensuring that the clear sides of the cuvette are facing the light sensitive part. Press the ‘R’ button and record the reading. Repeat this procedure for the remaining solutions. However, instead of pressing ‘R’, press ‘T’ to measure the other readings.

Here are the results gained from the colorimeter readings.

The results that have been found show that there is a significant difference in the light absorbance of the yeast cultures in different carbon sources. The more light absorbed by the solution means that there are more yeast cells present in the solution as less light can pass through due to the light being absorbed by the cells. The graph shows that fructose and maltose produced the highest yield of yeast. This may be due to the fact that both fructose and maltose are disaccharides. However, sucrose, a common disaccharide did not show a high yield of yeast being produced as the light absorbance for that culture was relatively low. Galactose, a monosaccharide sugar, showed a moderately high light absorbance which concludes that whether the carbon source is a monosaccharide or a disaccharide, it isn’t a factor which affects the growth rate of the yeast as there is no general pattern portrayed in the graph.

The control culture also produced a light absorbance reading of 1.25 O.D which contained no sugar compound. However, the carbon source could have been the carbon dioxide in the atmosphere, or even from the ammonium compounds. This shows that it is not essential to have a sugar compound present at all, as a relatively high yield of microorganisms can be produced with them and carbon can be sourced from other molecules.

A factor that could have affected the light absorbance readings could have been the fact that pipettes were used to transfer 5 drops of yeast culture to the cuvettes. Yeast, if not completely dissolved, can fall to the bottom of the flask and therefore the depth from which the 5 drops of yeast culture were taken could have a large impact on the results. For example, if the pipette was held at the bottom of the flask and transferred the sample from there, the light absorbance reading from the colorimeter would have high, as there would be more microbes present. However it the sample was taken fairly high in the solution, it would be likely to contain fewer microbes in that region and the reading would be quite low. If this investigation were to be repeated, a preliminary experiment could be carried out where the pipette is held at different depths of the flask to distinguish whether this could be an extraneous variable that needed to be controlled.

Another factor that could have varied the results of this experiment is the levels of dilution that took place when the light absorbance was measured. The sample had to be diluted with distilled water because the solution itself was not transparent enough to provide comparable results. When 5 drops of the yeast culture was placed in a cuvette, the rest of the cuvette was filled with distilled water. However, there was not an exact volume of water being added to each cuvette, so therefore one sample may have been diluted more than another. This would allow less light to be absorbed and consequently the results would have been affected.

Overall, to evaluate this investigation as a whole, the experiment that had been carried out has been successful in achieving the aim, which was to distinguish whether different carbon sources have an affect on the growth and reproduction rate of yeast cultures. However, there are many improvements that could be made if the experiment were to be replicated which would improve the accuracy and reliability of the results.