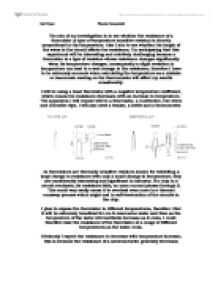 The aim of my investigation is to see whether the resistance of a thermistor (a type of temperature sensitive resistor) is directly proportional to the temperature.

The aim of my investigation is to see whether the resistance of a thermistor (a type of temperature sensitive resistor) is directly proportional to the temperature. Also I aim to see whether the length of the wires in the circuit affects the resistance. I’m anticipating that this experiment will be interesting and relatively challenging because a thermistor is a type of resistors whose resistance changes significantly when its temperature changes, consequently a slight variation in temperature can lead to a vast change in the resistance, therefore I have to be extremely accurate when calculating the temperature as a mistake or inaccurate reading on the thermometer will affect my results considerably.

I will be using a bead thermistor with a negative temperature coefficient, which means the resistance decreases with an increase in temperature. The apparatus I will require will be a thermistor, a multimeter, two wires and crocodile clips. I will also need a beaker, a kettle and a thermometer.

As thermistors are thermally sensitive resistors known for exhibiting a large change in resistance with only a small change in temperature, they are considerably interesting and significant in industry. If a chip in a circuit overheats, its resistance falls, so more current passes through it.

I must keep the surrounding room temperature the same or the particles in the wire will move faster (if the temperature is increased) and this will therefore have an effect on the resistance. The cross sectional area of the wire must be kept constant throughout as well.

The material of the wire must also be kept the same as different materials have different conductivity.

Also for the thermistor experiment, I must also keep the surrounding room temperature constant, the cross sectional area and the wire material constant for the same reasons as above.

To get an accurate reading on the thermometer which is going to be used, the depth of water must be at least 7cm, therefore I will need at least 7cm of water in my beaker to avoid inaccurate thermometer readings.

For the first experiment, the apparatus will be set up as above and the multimeter will be set on resistance.  The water will then be heated using a kettle (a Bunsen burner etc. could also be used) but I felt a kettle would be safer. A thermometer will record the temperature of the water which is to be poured into the beaker. The thermistor will then be complete submerged in the water. The results will be recorded.

As stated earlier, as a result of the structure of all conductive atoms, the outer electrons are able to move about freely even in a solid. When there is a potential difference across a conductive material all of the free electrons arrange themselves in lines moving in the same direction. This forms an electrical current. Resistance is encountered when the charged particles that make up the current collide with other fixed particles in the material. As the resistance of a material increases so to must the force required to drive the same amount of current. In fact resistance, in ohms is equal to the electromotive force or potential difference, in volts divided by the current, in amperes.

I feel that overall the results were quite accurate. This can be seen when we look at the graphs, which shows a relatively straight line with all of the points apart from one being very close to or on that line.

Wire temperature and may have affected some results, also the material of the wires may not be as pure as it should have been. The main reason for this was probably due to the equipment that we used being inaccurate. To extend the investigation, I could have used a different resistor, or changed the cross sectional area of the wire.