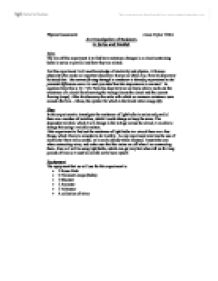 An Investigation of Resistors

In Series and Parallel

For this experiment I will need knowledge of electricity and physics. A famous physicist Ohm made an important discovery. Known as Ohms law, from his discovery he stated that: ‘the current flowing through a conductor is directly proportional to the potential difference across its ends provided that the temperature is constant’. In equation form this is: R = V/I. From his discovery we are know able to work out the resistance of a circuit from knowing the voltage across the circuit and the current flowing (amps). After his discovery the units with which we measure resistance were named after him – Ohms, the symbol for which is the Greek letter omega (Ω).

In this experiment to investigate the resistance of light bulbs in series and parallel there are a number of variables, which I could change or keep the same. The dependent variable, which I will change is the voltage across the circuit, I am able to change this using a variable resistor. 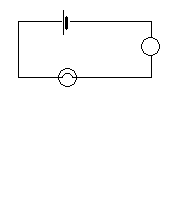 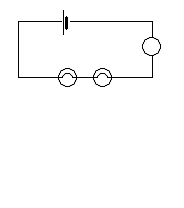 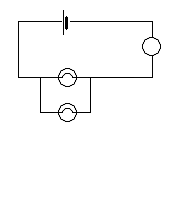 Firstly I will set up the equipment for the experiments in series. I will start of with the voltage on the power pack set to twelve volts. I will then add one bulb to the circuit. I will use the variable resistor to find the reading of 0.6 amps flowing through the circuit. I will then record the voltage across the bulbs. Increasing the amperage each time till I reach 1.3 amps. I shall then redo the experiment three times so I can work out an average reading and also to ensure accurate results. I shall then increase the number of bulbs to two in series and do the experiment again. Then I will do the same for two bulbs connected in parallel.

The independent variables in this experiment will be:

The variables I will be keeping constant in this experiment are:

Overall I think the experiment was carried out exceptionally well with very few errors. Also I did not record any unusual readings due to the fact that I checked the circuit was connected properly and I let the results stabilise before I took a reading. However, because I used non-ohmic bulbs there was a slight curve on the graph, this could have an effect on the reliability of my results. This could be avoided next time by using a set of ohmic bulbs to avoid getting the heating up and cooling curves on the resistance graph. From the results I am able to state a definite conclusion, which supported my prediction. My prediction stated, two resistors in series would double the resistance the current is held through each one and that two resistors in parallel should halve because the current is split between the resistors, through my results this is fully supported. However, I could extend the investigation I could add more bulbs in series and parallel circuits to see if it still follows the pattern I discovered in this experiment. For example if I used three bulbs in series and parallel would it mean that they would be three times as big and a third of the control.