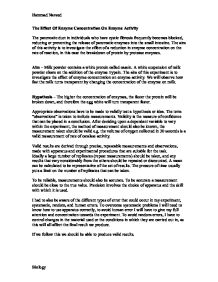 The aim of this experiment is to investigate the effect of enzyme concentration on enzyme activity. We will observe how fast the milk turns transparent by changing the concentration of the enzyme

The Effect Of Enzyme Concentration On Enzyme Activity The pancreatic duct in individuals who have cystic fibrosis frequently becomes blocked, reducing or preventing the release of pancreatic enzymes into the small intestine. The aim of this activity is to investigate the effect of a reduction in enzyme concentration on the rate of reaction, in this case the breakdown of protein by protease enzymes. Aim - Milk powder contains a white protein called casein. A white suspension of milk powder clears on the addition of the enzyme trypsin. The aim of this experiment is to investigate the effect of enzyme concentration on enzyme activity. We will observe how fast the milk turns transparent by changing the concentration of the enzyme on milk. Hypothesis - The higher the concentration of enzymes, the faster the protein will be broken down, and therefore the egg white will turn transparent faster. Appropriate observations have to be made to validly test a hypothesis or idea. The term "observations" is taken to include measurements. Validity is the measure of confidence that can be placed in a conclusion. After deciding upon a dependant variable to vary within the experiment, the method of measurement should also be known, the measurement taken should be valid e.g. the volume of oxygen collected in 30 seconds is a valid measurement of rate of catalase activity. ...read more.

in order to produce results that are valid and reliable. The independent variable within this experiment is the concentration of the trypsin. The dependent variable within this experiment is the time taken for the milk to digest. The constant/control variables of this experiment are the substrate (milk) concentration, the temperature and the pH. To keep the temperature constant in this experiment, we could have put the test tubes in a water bath, and set the temperature to 25?C, so that it would not affect the overall results. We did not do this, as we discovered, from the preliminary trial, that the experiment only lasted about five minutes maximum, and so temperature would not change dramatically in such a short space of time. We did however, close all windows and switch of radiators, we kept the experiment going in one area. This variable could have affected the end results if it had not bee controlled. If there were dramatic changes in room temperature, results would not have been reliable. As temperature gets higher, enzyme activity increases - enzymes work at its optimum at about 37?C, if temperatures get too high, they become denatured and no longer work. As temperatures decrease, enzymes become less active and stop working if temperatures are too low. So it is important to keep the temperature constant in order to see the effects of enzyme concentration on enzyme activity. ...read more.

Although the results were good, I could see a few anomalous results that may not be that accurate. I can identify that there is a significant difference between some of the results, for example the 0.8 and 0.2 enzyme solution. The variance of this suggests that there is an error within the results. The reason for this error may be identified as error systematic error and random error. An example of systematic error is if the solution was made up incorrectly. For example too much enzyme may have been added and too little water, if the solutions were made up incorrectly than the true result is not correct at anytime. Random error can also been the reason for the error within the result. An example of this is tiredness of the determining the end point of the solution. Also, as time was limited many of the recorded results may have been rushed. As a result of this, the accuracy of the results may have been affected. Like I said before the end point of each solution may not be correct it may always be different. To gain a more reliable result, more repeats should have been done and an overall average should have been worked out. Also other variable such as the concentration of the substrate i.e. the milk is to be kept constant and the temperature is also to be kept constant. ?? ?? ?? ?? Hammad Naveed Biology ...read more.