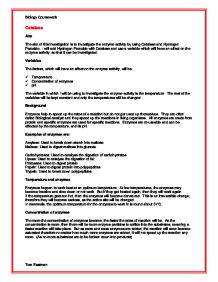 Catalase Aim The aim of this investigation is to investigate the enzyme activity by using Catalase and Hydrogen Peroxide. I will add Hydrogen Peroxide with Catalase and use a variable which will have an affect on the enzyme activity, so that it can be investigated. Variables The factors, which will have an affect on the enzyme activity, will be: * Temperature * Concentration of enzymes * pH The variable in which I will be using to investigate the enzyme activity is the temperature. The rest of the variables will be kept constant and only the temperatures will be changed. Background Enzymes help to speed up the rates of a reaction but do not get used up themselves. They are often called Biological catalyst and they speed up the reactions in living organisms. All enzymes are made from protein and specific enzymes are used for specific reactions. Enzymes are re-useable and can be affected by the temperature, and its pH. Examples of enzymes are: Amylase: Used to break down starch into maltose Maltase: Used to digest maltose into glucose Carbohydrases: Used to catalyse the digestion of carbohydrates Lipase: Used to catalyse the digestion of fat Proteases: Used to digest protein Pepsin: Used to digest protein into polypeptides Trypsin: Used to break down polypeptides Temperature and enzymes Enzymes happen to work best at an optimum temperature. At low temperatures, the enzymes may become inactive and slow down or not work. But if they get heated again, then they will work again. If the temperature gets too hot, then the enzymes will become denatured. This is an irreversible change; therefore they will become useless, as the active site will be changed. In mammals, the optimum temperature for the enzymes to work in is round about 37�C. Concentration of enzymes The more the concentration of enzymes become, the faster the rates of reaction will be. As the concentration is more, then there will be more enzyme particles to collide into the substrates, meaning a faster reaction will take place. ...read more.

the liver with the scalpel and to take care not to touch the tri-stands when hot, or to be careful when taking out the beakers, etc. Prework For this investigation, I have done two preliminary works. At the start, I planned to use 0.1g of liver and 20ml of Hydrogen Peroxide for each experiment. I timed how long it would take for 50cm3 of gas to be collected in the gas syringe. So to make sure that these ranges and methods were suitable enough, I had done the experiment. What happened was that, none of the temperatures used for the experiment produced 50cm3 of gas, therefore I could not produce any results. Because of this, I have thought of another range and method. I thought that as not enough gas was produced, I would need to increase the amount of liver and so... My second prework was to use 0.5g of liver and 30ml of Hydrogen Peroxide for each experiment. This time, I timed the experiment for one minute to see how much gas would be collected. In the end, I also did not produce any results as each of the experiments had produced more gas than the actual gas syringe could record, therefore the syringe popped out from the other end! As of this, I have now produced a better method and range to be used. This time the amount of liver is in between 0.1g to 0.5g and so it should now produce the right amount or enough to show a decent set of results. These are shown in the 'range' section. Range The variable I have chosen for this investigation is the change of temperature. The amount of liver to be used for each experiment will be 0.2g and the amount of Hydrogen Peroxide will be 25ml. I will time how much gas will be collected in 30secs! Results Amount of gas collected ( cm3 ) ...read more.

This is a point in which I did not consider at the start and it may have been the major source in affecting the results. Also, another inaccuracy is that as I weighed the liver and placed it on the tile, I had to scoop it into the beakers and then into the conical flask. As of this, some of the liver may have been left, meaning that the liver would be actually less than the real amount. It was very hard to get the liver into beakers and out, as they tend to stick onto the sides, etc. They also stuck onto the scalpel! Reliability: The results, which I now have, are reliable enough to tell me whether my prediction is correct and to make a valid conclusion. There are also enough results done to make it fair. I also have enough evidence in the results to support all my points. How to improve Method and Accuracy: Since I have taken about two to three lessons to complete my experiments, to improve my accuracy of the results and the method, I could have carried out all the experiments on the same lesson / day. The reason for this is so that I will get to use the same liver and not two different ones (as each lesson is supplied with a new liver). If this were to be done, then the same Catalase would have been used meaning it would be fair and more accurate. I can also improve the method by some how managing to weigh the liver without needing to touch anything, as then it won't have the chance to stick to things losing more liver, losing more Catalase! Extension to work: To extend my work on this investigation, I will probably extend the temperatures so that I could see whether the Catalase would totally denature, meaning the rate of the reaction would stop and therefore no gas given off. Apart from this, I cannot really think of any more extensions to investigate the enzyme activity using temperature as the factor. Biology Coursework Tom Eastman ...read more.