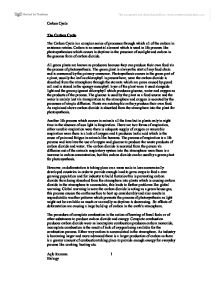 The Carbon Cycle is a complex series of processes through which all of the carbon in existence rotates. Carbon is an essential element which is used in life process like photosynthesises which occurs in daytime in the presence of sunlight and carbon in the gaseous form of carbon dioxide.

All green plants are known as producers because they can produce their own food via the process of photosynthesis. The green plant is always the start of any food chain and is consumed by the primary consumer. Photosynthesis occurs in the green part of a plant, usually the leaf as chlorophyll is present here, were the carbon dioxide is absorbed from the atmosphere through the stomata which are pores caused by guard cell and is stored in the spongy mesophyll layer of the plant were it used alongside light and the green pigment chlorophyll which produces glucose, water and oxygen as the products of the process. The glucose is used by the plant as a food source and the water is mainly lost via transpiration to the atmosphere and oxygen is secreted by the processes of simple diffusion. Plants are autotrophic as they produce their own food. As explained above carbon dioxide is absorbed from the atmosphere into the plant for photosynthesis.

However, as deforestation is taking place on a mass scale in less economically developed countries in order to provide enough land to grow crops to feed a ever growing population and for industry to build factories this is preventing carbon dioxide from being absorbed from the atmosphere into plants which is causing carbon dioxide in the atmosphere to accumulate, this leads to further problems like global warming. Global warming is were the carbon dioxide is acting as a green house gas, this process causes the earths surface to heat up considerably and also results in unpredictable weather patterns which prevents the process of photosynthesis as light might not be available as much or as readily as daytime is decreasing.  So effects of deforestation are causing a large build up of carbon in the earth’s atmosphere.

The process of Ocean acidification is were carbon dioxide is being absorbed from the atmosphere by the oceans and rivers which increase the concentration of carbon in water, and as the carbon dioxide combines with the carbonate ions in water so there is the production of carbonic acid which is a acid, this is the reason that the name ocean acidification as oceanic water is turning acidic which has a adverse effect on marine and aquatic organism like fish. Fish begin to die which effects many food chains causes larger organisms to die as there is not enough food, also as carbon dioxide concentration increases this aids the growth of algae, small green plants in the ocean which cause algal blooms to be formed, this bloom stops oxygen from being absorbed into water for organisms which causes the death of large number of organisms, this process is known as eutrophication which is simply caused by a increase uptake of carbon dioxide into the water of seas, oceans and rivers which cause the process of photosynthesis.

Another reason why there has being an increase in carbon concentration in the atmosphere is due to Humans activity which increase carbon concentration by burning of mass fossil fuels. Also the ownership and use of motor vehicles, planes and motorbikes all require the use of fossil fuels when burn to produce carbon dioxide which is released into the atmosphere and causes global warming. So the effects of global warming can be seriously reduced if the use of such vehicles was drastically reduced and more plants were planted.

Global warming increases the chance of unpredictable weather changes occurring which means that there is a higher chance that there is less light available for photosynthesis also meaning less carbon dioxide is absorbed from the atmosphere which result in the accumulation of carbon in the atmosphere, also as photosynthesis is effected by weather and light this could mean a decrease in crop yield meaning less food available for both humans and animals, which could severely impact on food chains and cause many problems like the endangerment of many animals or even in worst cases the extinction of some species which are highly sensitive to changes in the food chain.

Studies from well recognised scientist bodies clearly show carbon concentration is increasing and there is a higher chance that in many years to come that there will be severe problems linked with the increase in carbon on the surface of the earth. This will cause unpredictable weather, more natural disasters like floods, earthquakes, hurricanes and many other natural disasters,

Carbon also moves from plants and animals to the ground, this is simply done when animals or plants die their bodies are decomposed and decayed by micro organisms otherwise known as decomposers. This decomposing action releases carbon into the ground, and over time coupled with high temperature and pressure will result in the formation of fossil fuels which can be used in a million years of time as a source of fuel. Limestone’s scientific name is calcium carbonate, which consist of carbon, when they are deposited from shells of sea animals to the sea floor they can release carbon back into the atmosphere if the limestone undergoes thermal decomposition to produce calcium oxide as well as carbon dioxide were it shall diffuse out of the sea and into the atmosphere by following laws of diffusion down a concentration gradient.

Below is a typical carbon cycle which outlines the process which involve the use of carbon like I have summarised in the essay like- photosynthesis, combustion, respiration, fossilisation, ocean acidification and burning of fossil fuels. I downloaded this image of the internet from the web site of eo.ucar.edu/kids/green/cycles6.htm 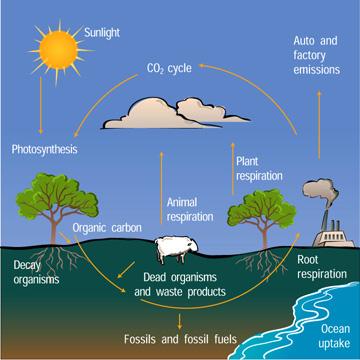 Finally, it is obvious that carbon in the atmosphere is accumulating mainly due to the effects of deforestation coupled with human activity. Many methods have been tried and tested like renewable energy resources like wind, solar, nuclear and etc. But it seems clear that we are trapped as global warming has begun and there is no way of preventing it due to large reliability of fossil fuels to provide energy. Certain process like industry need to combust in order to survive economically in this recession and is made more difficult with the risk of global arming and problems like deforestation and fossilisation. I think that there is no way of stopping use of fossil fuels but I think we can reduce the amount of carbon which we release in to the atmosphere by simply reducing the use of such substances.

This article contains a lot of facts, which are all relevant to the question. What the author failed to do is to explain why those facts relate to the question. For example, he/she jumped from greenhouse gases to acid rain. ...

This article contains a lot of facts, which are all relevant to the question. What the author failed to do is to explain why those facts relate to the question. For example, he/she jumped from greenhouse gases to acid rain. If you are to do that, at least have a heading of Ã¢â‚¬ËœFactors concerning levels of atmospheric CO2Ã¢â‚¬â„¢ or simple write in a short paragraph what you are going to discuss.
There are some inaccuracies in the essay, for example, not all carbon in existence follow the carbon cycle (rotate is the wrong word to use), think about carbon in outer space. Also, not all food chains start with green plants, there are other ways for organisms to obtain energy, for example using energy from heat vents deep under the sea.
Just some wordings should be clarified, which if the author read through the essay once, would probably have spotted. For example, the word cause is not used appropriately here Ã¢â‚¬Ëœthe stomata which are pores caused by guard cellÃ¢â‚¬â„¢ The guard cells forms the pore, but it didnÃ¢â‚¬â„¢t cause it.
There are no details or formulas as to how the carbon is fixed. No detailed mechanism is required for this level, but still a simple A+B=>C+D would be better.
The author should give clear and specific examples, rather than generalizing them all. E.g. Ã¢â‚¬Å“Studies from well recognised scientist bodiesÃ¢â‚¬Â.
It can improve on this by adding additional information about effects on other parts of the atmosphere.

The main points are hidden in the essay, but the delivery was very poor - the wordings (e.g. Ã¢â‚¬Ëœcertain process like industry) needs improving, I think the author have rushed in writing this and have not gone back to review it again.