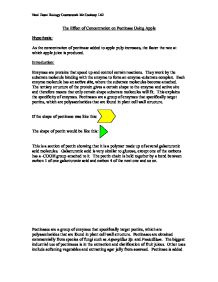 The Effect of Concentration on Pectinase Using Apple

One reason why some of the individual recordings may be slightly high is because of the excess juice that filtered out quickly as soon as the test tube was emptied into onto the filter paper. Another reason could be that the time at which the stopwatch was started meant that it was more than 30 seconds of juice obtained. The stopwatch was started after all the contents of the test tube were emptied, which took a few seconds and during this time juice was filtering through. Therefore an improvement to this part of the method would be to find a way of emptying the test tube in one go. Using a slightly bigger test tube or even a boiling tube could do this. The higher than expected values for the rate of reaction could also try and be rectified by increasing the length of time that measurements were taken. This would have provided more data and therefore the graphs and rate of reaction would be more accurate. However this could only be done with more time in which to carry out the experiment. A more general improvement to the experiment would be the precision of the apparatus used. Although the apparatus used was the most accurate available, a more accurate water bath could have been used and also a clearer and more accurate measuring cylinder. Further work to do with this investigation and exploring other factors relating to this experiment can also be carried out in order to add weight to the conclusions made earlier. It is possible to go on and look at the effect of temperature on pectinase and also substrate concentration, however the latter would be fairly difficult to measure. An investigation to look at the effect of pectinase on other fruits such as plums or grapes or investigate changes in concentration of other enzymes such amylase or catalase. These investigations would extend the enquiry of the enzyme pectinase and also into the substrate it is having an effect on. Neal Desai Biology Coursework Mr.Cooksey L62 ...read more.