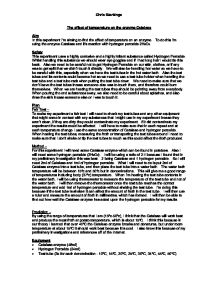 The effect of temperature on the enzyme Catalase.

The effect of temperature on the enzyme Catalase Aim In this experiment I'm aiming to find the effect of temperature on an enzyme. To do this I'm using the enzyme Catalase and it's reaction with hydrogen peroxide 2H2O2. Safety This experiment uses a highly corrosive and a highly irritant substance called Hydrogen Peroxide. Whilst handling this substance we should wear eye goggles and if I had long hair I would tie this back. Also we need to be careful not to get Hydrogen Peroxide on our skin, clothes, or if any was to get spilt that we didn't touch it directly. We will also be handling hot water so we have to be careful with this, especially when we have the test tubes in the hot water bath. Also the test tubes and its contents could become hot so we need to use a test tube holder when handling the test tube and a test tube rack when putting the test tube down. We need to make sure that we don't leave the test tubes incase someone else was to touch them, and therefore could burn themselves. When we are heating the test tubes they should be pointing away from everybody. When pouring the end substances away, we also need to be careful about splashes, and also rinse the sink incase someone else or I was to touch it. Plan Fair Test - To make my experiment a fair test I will need to check my test tubes and any other equipment that might come in contact with any substances that I might use in my experiment incase they aren't clean, if they are dirty they could contaminate my experiment. If it did contaminate my experiment the results could be affected. I will have to make sure that in each repeat and at each temperature change I use the same concentration of Catalase and hydrogen peroxide. ...read more.

In my preliminary investigations I found that the best pH for Catalase is 7. Measurements Range of values - For my temperature ranges I will be using the range of 15�c to 50�c. I am using these ranges because they are the temperatures, which will produce the best results to prove which temperature, is best. For my pH level I will be using the same level which is pH7. Also like I mentioned earlier the ratio of Catalase to hydrogen peroxide would be 2ml: 1ml, because of my preliminary investigations. Intervals between readings - For my temperatures I will be using the range of 15�c to 50�c. So the intervals (10�c) I will be using are 15�c, 25�c, 35�c, 45�c, 50�c. Each interval will also be repeated three times. If when doing my experiment I find that it would be useful to do more temperatures I will do so, therefore I can get a better variety of results towards the temperature that seems to be making the Catalase produce the most froth - O2. Scientific theory -advanced During the experiment the enzyme Catalase will be acting upon the hydrogen peroxide which is the substrate. For the Catalase to work, the substrate has to touch and "lock" with the Catalase. For this to happen the substrate and the Catalase need to be moving. The collision theory states that the higher the temperature the faster the molecules will move, so this means that if the temperature is high the substrate and the Catalase are more likely to combine because they are more likely to bump into each other. But when the temperature is cool they are less likely to combine because they are moving more slowly. Lock and Key theory - The lock and key theory is the joining of a substrate and an enzyme molecule. The molecules start off separate, and combine for a short time, and then separate creating one new substance and leaving the enzyme free to take part in another experiment. ...read more.

****
A detailed account with a good attempt at using enzyme research to explain results. More rigorous control of variables and more careful use of language in places would improve it.