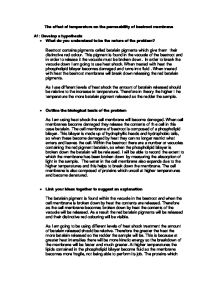 The effect of temperature on the permeability of beetroot membrane

The effect of temperature on the permeability of beetroot membrane A1: Develop a hypothesis * What do you understand to be the nature of the problem? Beetroot contains pigments called betalain pigments which give them their distinctive red colour. This pigment is found in the vacuole of the beetroot and in order to release it the vacuole must be broken down. In order to break the vacuole down I am going to use heat shock. When treated with heat the phospholipid bilayer becomes damaged and turns into fluid. When treated with heat the beetroot membrane will break down releasing the red betalain pigments. As I use different levels of heat shock the amount of betalain released should be relative to the increase in temperature. Therefore in theory the higher the temperature the more betalain pigment released so the redder the sample. * Outline the biological basis of the problem As I am using heat shock the cell membrane will become damaged. When cell membranes become damaged they release the contents of the cell in this case betalain. The cell membrane of beetroot is composed of a phospholipid bilayer. This bilayer is made up of hydrophyllic heads and hydrophobic tails, so when these become damaged by heat they can no longer restrict what enters and leaves the cell. Within the beetroot there are a number or vacuoles containing the red pigment betalain, so when the phospholipid bilayer is broken down the betalain will be released. I will be able to record the extent to which the membrane has been broken down by measuring the absorption of light in the sample. The water in the cell membrane also expands due to the higher temperatures and this helps to break down the membrane. The cell membrane is also composed of proteins which uncoil at higher temperatures and become denatured. * Link your ideas together to suggest an explanation The betalain pigment is found within the vacuole in the beetroot and when the cell membrane is broken down by heat the contents are released. ...read more.

If I had more time I would carry out more replicates. I also do not have a digital waterbath so it is vital that I repeat this experiment at least three times to develop an accurate mean. (Results Overleaf) C2: Interpretation * Assessment of the reliability of the data Having now carried out the experiment, tabulated the results and created graphs I can now confirm that the experiment followed my hypothesis. As the temperature increased the percentage absorption of the pigment also increased. For instance at 40�C the percentage absorption of the pigment was 0.41 compare this with 50�C and the absorption was 0.46. This trend continues throughout the temperatures but between 50�C and 60�C there is the biggest increase in the % absorption. At 50�C the percentage absorption was 0.46 whereas this was 1.62 at 60%. That's a 1.16 difference, such a huge difference like this clearly show that at temperatures above 50�C the membrane has become seriously damaged releasing lots of the pigment. The confidence limits for my results are quite wide which would indicate that there was some variation in my results. For instance at 60�C the upper limit was 2.024 and the lower limit was 1.216, this basically means that based on my results if this experiment was repeated there is a 95% chance of the results falling within these brackets. The upper limit for 70�C is 1.945 and the lower limit is 1.815. When compared with the confidence limits for the class results I can see that there is less variation as the limits are not so spread. For instance in the class results at 60�C the upper limit was 1.64 and the lower limit was 1.12. This only leaves a difference of 0.52, whereas the in my results there is a difference of nearly 0.8. * Comment on the reliability of the data I think the data I have collected is reliable due to the equipment and steps I have taken to ensure reliability. ...read more.

Some of the beetroot discs were also cut from different size beetroots and therefore some may contain more of the betalain pigment. Also some of the discs were from the core of the beetroot and the core contains more betalain. However the class results show less variation between the confidence limits thus indicating more reliable results. Both sets of results show that as the temperature increases the permeability of the cell membrane increases. As a result more betalain escapes and the solution becomes darker due to the presence of betalain, therefore the solution absorbs more light. * Assess the validity of the implementation of the procedure I think this procedure went quite well however I feel that the regulation of the waterbath may have affected my results. If I had the time and the resources I would like to repeat this experiment using a digital waterbath which would allow me to control the temperature to 0.5�C. I would also like to use more replicates at each temperature and repeat this experiment at different temperatures. I would also like to find out at exactly which point between 50�C and 60�C does the cell membrane start to become denatured. * Suggest another variable which could be investigated If I had more time and greater resources I would like to investigate other factors. For instance I would like to investigate the effects of detergents. Detergents help bring fat and lipids into a solution so in theory should break down the phospholipid bilayer in the beetroot cell membrane. Higher detergent concentrations should break down the membrane further therefore releasing the betalain into the solution. I would also like to investigate what would happen if I used pickled beetroot instead of fresh beetroot. Pickled beetroots are treated and are designed to last longer therefore it would be interesting to see what effects temperatures would have on the breakdown of their membrane. ?? ?? ?? ?? ...read more.

A very lengthy report dictated by a very rigid framework of imposed headings that were unquestionably very unhelpful. They interrupted the normal flow of information and led to considerable repetition.
The writer has not always grasped the meaning of key words - reliability, accuracy and validity.
A risk assessment was not carried out and control variables were given rather short shrift.
In view of the absence of individual and class data, it is difficult to assess the validity of the overall investigation. Nonetheless, within the constraints placed upon the writer, this report reflects a very significant effort.