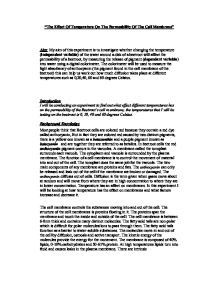 The Effect Of Temperature On The Permeability Of The Cell Membrane

"The Effect Of Temperature On The Permeability Of The Cell Membrane" Aim: My aim of this experiment is to investigate whether changing the temperature (independent variable) of the water around a disk of a beetroot will affect the permeability of a beetroot, by measuring the release of pigment (dependant variable) into water using a digital colorimeter. The colorimeter will be used to measure the light absorbency of anthocyanin (the pigment found in the cell membrane of the beetroot) this can help us work out how much diffusion takes place at different temperatures such as 0,20,40, 60 and 80 degrees Celsius. Introduction I will be conducting an experiment to find out what effect different temperatures has on the permeability of the Beetroot's cell membrane; the temperatures that I will be testing on the beetroot is 0, 20, 40 and 60 degrees Celsius. Background Knowledge Most people think that Beetroot cells are colored red because they contain a red dye called anthocyanin, But in fact they are colored red caused by two distinct pigments, there is a yellow one known as a betaxanthin and a purple pigment known as betacyanin and are together they are referred to as betalins. In beetroot cells the red anthocyanin pigment occurs in the vacuoles. A membrane called the tonoplast surrounds each vacuole. The cytoplasm and vacuole is surrounded by the plasma membrane. The function of a cell membrane is to control the movement of material into and out of the cell. The tonoplast does the same job for the vacuole. The two main components of any membrane are proteins and fats. The anthocyanin can only be released and leak out of the cell if the membrane are broken or damaged. The anthocyanin diffuses out of cells. Diffusion is the term given when gases move about at random and will move from where they are in high concentration to where they are in lower concentration. ...read more.

The longer the beetroot is left, the larger amount of dye will leak out. So I must ensure that I use a stopwatch to time the experiment for 10 minutes and take the boiling tube out of the water bath as well as taking the beetroot out of the boiling tube. Equipment I must ensure that all the equipment is clean and not contaminated, as this will affect my results because the substances might get into the sample that may affect the light absorbency and this may affect the reading of the spectrophotometer. To control this variable I will check the equipment before using it in my experiment and I will always wash any equipment before reuse. Temperature of the water baths The temperature of the water bath must be kept constant because if the temperature is different to the temperature you are recording then you might produce different results e.g. if you test the diffusion of a beetroot at 300C but the temperature of the water bath is set at 250C, the sample may be less concentrated to how it would have been if it were at 300C. I have taken this variable into account and will keep it controlled by checking the temperature of the water baths to make sure they are at the temperatures I require. Other variables to consider: - Keep temperature the same throughout the diffusion process. This will be achieved by placing the boiling tubes in the water baths until the time is up. - The number of beetroots must be the same for each experiment as then the experiment will not be accurate as if there are more pieces of beetroot more diffusion can take place therefore more anthocyanin being released. This will not affect my experiment as I am only using one 4cm long beetroot. - The pipette needs to be washed before a sample of solution is taken out as from the previous experiment, some excess pigment may remain in the pipette and if this is used for another sample then it may alter the results. ...read more.

I think that a wider range of temperatures should be used because I think it is appropriate for the experiment. Smaller intervals could have been used to find out at what specific temperature the membrane intensity was breached. So I would repeat the experiment at temperatures of 0,10, 20,30,40,50,60,70 and 80 degrees Celsius. I could have repeated the experiment more than three times for each temperature but overall I tried to do my best as time was on my shoulder, I also tried my best of ability to cut the beetroot all at the same size and used a water bath to keep the temperature consistent. The samples were left in the water bath for a same period of time. The boiling tubes may have been dirty so this could have affected the colour of the sample also. The thermometer was used to check the temperature at the start of when the beetroot was put in the water and at the end of the intended time when taking the beetroot out. I also washed the beetroot each time I put it in the boiling tubes inside the water bath. A thermostatic water bath is much more accurate as it retains water at the required temperature, it can also be said that the results will be more reliable as a better piece of equipment used. Some of the disadvantages about this experiment that I carried out was I did not always cut the beetroot straight and sometimes I cut them vertically which causes the surface area to be different on the cylinders. Some beetroot cylinders were washed more than once and shaking the boiling tubes unevenly before putting in the colorimeter could produce not the best results. Also the age of the beetroot needs to be controlled to prevent unreliable results, the older the beetroot the more betacyanin and anthocyanin pigment available therefore the experiment will be unfair, hence I will use a beetroot that is new and just grown. So overall my results have supported my prediction, the results were fairly accurate and reliable and allowed me to give a firm conclusion. ...read more.

Overall, a very substantial effort with evidence that the writer has grasped much of the detailed biochemistry relating to thermal instability of membranes.
There is, however, considerable repetition. The writer needs to adopt a much more concise approach to each section, making it very clear what each sets out to achieve.
There is some confusion over the precise details of denaturation and the properties ascribed to lipids and proteins. Furthermore, a much more disciplined use of the terms reliable, accurate and valid is required at this level.
Overall, however, a very considerable effort (5000 words!) at a notoriously difficult topic.

This essay that centers around the investigation on the effect of temperature on the permeability of the cell membrane is very well-written, very detailed on the procedures used, very meticulous on interpreting the results collected to draw concrete conclusions. The ...

This essay that centers around the investigation on the effect of temperature on the permeability of the cell membrane is very well-written, very detailed on the procedures used, very meticulous on interpreting the results collected to draw concrete conclusions. The report has all the required sections of an investigation and is very detailed. Beginning with the introduction, the writer includes intricate details on not only beetroots but also the dynamic structure of the cell membrane using the fluid mosaic model. The aim itself is very clear in stating the focus of the experiment, the independent and dependent variables, which is commendable for the clarity and focus. The writer also describes a preliminary experiment that was used to plan and perhaps improve on the current style of the investigation, which reflects the earnest efforts of the writer. The details on the materials and methods was amazingly excellent in that not only is the material stated, the writer also includes relevant details regarding these equipment. The procedures described are equally detailed, making constant references to other sections on precautionary methods as well. However, the steps could have been listed instead of a prosaic style for easier understanding. Similarly, the writer could have simplified the presentation style by segmenting the different procedures into various sections. While the methods used are common in any such experiment, the writerÃ¢â‚¬â„¢s explanation of these steps is definitely something different. The presentation of a control experiment, detailed explanation on the variables, providing a justified hypothesis is very neatly and appropriately done. The writerÃ¢â‚¬â„¢s interpretation of results is also well-written in that all trends observed, the notable aspects f the data such as maxima/minima are indicated clearly. These observations are carefully considered using relevant biological theory and well-justified to form concrete conclusions as well. As a general ending, the writer provides a list of well-explained, realistic improvements to the experimental procedure.

The depth of the essay is reflected well by the investigation itself. All the sections of the report are very detailed. The use of multiple levels of experiments in the form of preliminary, control and actual experiment is commendable. The writer also explains what each variable is and how they are manipulated very clearly. The depth of analysis is well-brought out in the detailed explanation for the procedure. More notably, the evaluation and conclusion sections discuss the data in a sophisticated manner. Hence, the level of analysis was very good.

The writing style of the essay needs some improvement, but there are no glaring errors overall. The presentation of data needs to be better, especially with the consistency of significant figures, use of units for data like degrees Celsius as well as the presentation of graphical and tabular data. Overall, the effort for the content of the report is amazingly well-done, while the presentation aspect could be improved.