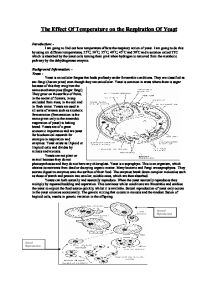 The Effect Of Temperature on the Respiration Of Yeast.

The Effect Of Temperature on the Respiration Of Yeast Introduction: - I am going to find out how temperature effects the respitory action of yeast. I am going to do this by using six different temperatures, 25oC, 30oC, 35oC, 40oC, 45oC and 50oC and a solution called TTC which is absorbed by the yeast cells turning them pink when hydrogen is removed from the metabolic pathway by the dehydrogenase enzyme. Background Information: - Yeast: - Yeast is unicellular fungus that buds profusely under favourable conditions. They are classified as sac-fungi (Ascomyctes) even though they are unicellular. Yeast is common in areas where there is sugar because of this they are given the name saccharomyces (Sugar fungi). They grow on the surface of fruits, in the nectar of flowers, in sap excluded from trees, in the soil and in fresh water. Yeasts are used in all sorts of arrears such as alcoholic fermentation (fermentation is the name given only to the anaerobic respiration of yeast) to baking bread. Yeasts are of a great economic importance and are yeast for biochemical research for example in respiration and enzymes. Yeast exists as Diploid or Haploid cells and divides by mitosis and meiosis. Yeasts are not plant or animal because they do not photosynthesise and they do not have any chloroplast. Yeast is a saprophyte. This is an organism, which obtains its nutrients from dead or decaying organic matter. Many bacteria and Fungi are saprophytes. They secrete digestive enzymes onto the surface of their food. The enzymes break down complex molecules such as those of starch and protein into smaller, soluble ones, which are then absorbed. Yeasts can both sexually and asexually reproduce. When the yeast asexually reproduces they multiply by repeated budding and separation. This continues whilst conditions are favourable and enables the yeast to exploit the food source quickly, whilst it is available. Sexual reproduction of yeast only occurs in the yeast colonies occasionally. ...read more.

I will use the colorimeter by restarting the colorimeter using distilled water (5:5cm3) then I will take the blue-green filter and place it in the filter hole as this is the complimentary colour to pink. Once I have placed the filter in I will place some of my diluted TTC-Yeast mixture and then put it in to the hole provided for the dilute the solution and then test it and then note the percentage absorbance down. I have to dilute the TTC-Yeast mixture because it is too thick and the colorimeter would read 0% absorbance. I will then record my percentage absorbance values in a table that will look like this Once I have noted the absorbance I will do the experiment again but this time with another temperature and repeat it all three times and take an average and also find the rate of reaction. Before I start to take down results I will do a pulmonary experiment to test that every thing is working well and then I will start the real test. Diagram: - Variables: - There are three types of variables: - 1. Independent variables (what I can't control) 2. Controlled variables (what I can control) 3. Changing variable (what I am changing) Independent variables: - The things that I can't control are: - * The yeast activity. (This will affect my experiment because if the yeast is active the reaction will take place faster but if it is not active it is slow as the removal of hydrogen from the pathway takes longer). Controlled variables: - The things that I can control are: - * The volume of TTC. (This has to be controlled because if there is more TTC, the taken fore the TTC solution to change from colourless to pink increases this is because there is more of it to change colour therefore more hydrogen from the metabolic pathway is needed to be passed on to the TTC. ...read more.

This experiment is not reliable because by the time you try to read the final meniscus level more water has been displaced also making the experiment inaccurate. 4. Monometer Tube This experiment also involves the use of carbon dioxide. This time when the yeast respires and releases carbon dioxide it passed through the delivery tube and in to the monometer tube. The carbon dioxide the give pressure on to the coloured liquid inside the tube and forces it to move. A curtain time is set for the experiment for example 30 seconds and the movement of the coloured liquid determines the rate of respiration. This experiment also has an advantage to the fact that there is not a big source of human error by using the eye and memory. I did not choose this method because the monometer tube is very sensitive to carbon dioxide therefore if the yeast is not very active or the experiment is at a low temperature then you will still get a good result, although this seems like an advantage its not because if the yeast is very active or the experiment us at a high temperature then the reaction will work to fast and the coloured liquid will move more quickly making it hard to read the end point. Reasons for choice of the method that I am using: - The reason I chose the method that I chose is because it is quick, easy reliable to the extent that the colour change colourless t pink is easy to spot. Another advantage for this experiment is because even if the yeast is not active then a colour change will still occur because of the amount of hydrogen being removed from the metabolic pathway is more than carbon dioxide so this experiment has an advantage over the other methods. The end product of this experiment can also be added to a colorimeter to find the end point and make the results more accurate and reliable. ...read more.

*****
This is a very detailed and comprehensive plan of an investigation. The author demonstrates a clear understanding of all relevant theory and considerable attention to detail is evident throughout. The writing is of a very high standard.