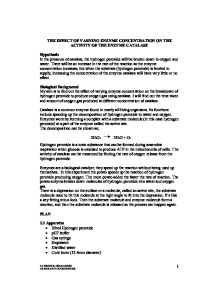 By dividing it, the amount of oxygen released per minute gives me the rate of enzyme activity. I will report my readings in a reading in this form. Number of Potato discs Vol. of H2O2/30vols(cm3) Volume of gas released(cm3) Time taken for gas release(s) Rate of Reaction (cm3s-1) 05 10 60 10 10 60 15 10 60 20 10 60 25 10 60 30 10 60 35 10 60 Surface Area (cm2) Vol of Gas released (cm3) Rate of Reaction (cm3s-1) 32.5 65.0 97.5 130.0 162.5 195.0 227.5 Risk Assessment * An overall should be worn, because the hydrogen peroxide is a dangerous chemical and so gloves and goggles will have to be warn too, at all times, so that it does not react with skin or get into our eyes. If it does by any changes, eyes must be washed immediately with warm water and the teacher should be informed. * Hair should be tied back so that it does not come in the way as a distraction. * The apparatus should not be kept too close to the edge of the bench, in case anything spills. * The side arm test tube should be supported; maybe with a retort stand or test tube rack, the other test tube should be placed in the same test tube rack and kept away from the edge of the bench. Hydrogen peroxide is a very dangerous solution; it can burn through clothes, bench surfaces and even skin, and therefore all safety issues should be taken into account and not ignored. Environmental and Ethical Issues Potatoes will be used; as they do not contain blood (as liver) therefore there is no problem of infection. Moreover, there is no problem with animal rights or religious concerns. Muslims might object to pork and Hindus to beef. METHOD I used a cork-borer to take out samples of potatoes from the tubers. ...read more.

To make sure temperature does not affect the reaction, I used gloves throughout and made sure I did the experiment in a short period of time to make sure there was little or no change in the temperature. In all, I think for a minor investigation my experiment went as expected but this cannot be fully ascertained as it is not an in-depth view of the factors. Criticisms & Ways to Improve Experiment Instead of using potato discs that have a slight variation in size and volume of catalase, as an enzyme, I believe it would have been easier and less error-prone to use a 1molar solution of the enzyme catalase for the experiment. This will reduce chances of errors in the investigation. In this experiment, I only investigated five enzyme concentrations. Although there was a large range, there were insufficient measurements between the readings creating a gap where guess work was what I used to predict the rate of reaction at these points. If I were to do this experiment again, I would measure more rates of reactions between the readings already measured. In future investigations, a far greater number of enzyme concentration between those already recorded will be taken into account. Because in this experiment only five enzyme concentrations was considered thereby creating a gap where the rate of reaction at these points needed to be assumed. But having a larger range and a greater number of enzyme concentration values, the graph should would be clearer with more trends, this will improve the accuracy of the experiment. To broaden the scope of the investigation, and to add more information to the enquiry, I could test the effect of enzyme concentration on the rate of this same reaction- decomposition of hydrogen peroxide by catalase. But it time, I would test the time taken for the reaction to be completed instead of how much of the oxygen was released in one minute. ?? ?? ?? ?? 1 LAWRENCE GBADAMOSI AS BIOLOGY COURSEWORK ...read more.