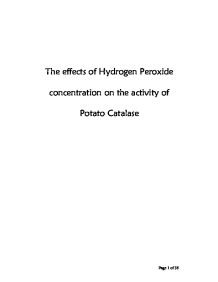 The effects of Hydrogen Peroxide concentration on the activity of Potato Catalase Section 1 - Plan Introduction In this experiment, I will be aiming to find what effect the concentration of Hydrogen Peroxide has on the activity of Potato Catalase. Catalase is an enzyme found in most living organisms. Its main function is catalyzing the decomposition of Hydrogen Peroxide into water and oxygen. The equation for this is: The Hydrogen Peroxide is produced as a by-product of aerobic respiration, and is damaging to bodily tissue. To deal with this, the body uses Catalase to break down the poisonous Hydrogen Peroxide into water and oxygen, which are both naturally occurring elements. This type of reaction, in which the substrate is broken down into two or more different products, is called a catabolic reaction. In this experiment, I will be trying to found out how the concentration of substrate affects the rate of its corresponding enzyme. I will be using Hydrogen Peroxide, H2O2, as the substrate and Catalase as the enzyme. Catalase breaks down Hydrogen Peroxide into Oxygen, which can easily be measured as a volume. The activity of Catalase can be measured by finding the rate of oxygen released from Hydrogen Peroxide. Minced potato is a suitable source of Catalase and the pH will be kept at 7. Theory An enzyme is a substance which speeds up a reaction without getting used up itself. An enzyme works by lowering the activation energy needed for a reaction to take place, supplying an alternate metabolic pathway for the reaction [4]. This process dramatically increases the rate of reaction. Figure 1.1 describes this process in action. Enzymes are highly specific, and each enzyme has its own set of optimum conditions in which it is most efficient. Factors affecting the rate of reaction in which enzymes are present are: * Temperature * pH * Substrate Concentration * Enzyme Concentration * The presence of Inhibitors The reason enzymes are affected by these factors is mainly due to the structure of an enzyme. ...read more.

This can cause the enzyme being unable to bind to substrate. Enzymes have an optimum pH. However, with each enzyme this optimum which changes. Enzymes have an optimum pH due to the environment in which it is present. For example, the stomach has an acidic environment (about pH 2), so therefore enzymes used in the stomach are adapted to function most efficiently at pH 2. Enzymes can still function outside of their optimum pH, however there is a limit to the variation of this. Figure 1.5 represents this idea. * Temperature Increased temperature gives enzymes more kinetic energy. This increases the change of collisions between enzyme and substrate. Like pH, each enzyme has a specific temperature at which if functions most efficiently, and it also varies from enzyme to enzyme. Unlike pH, a graph of temperature-to-reaction-rate will not be symmetrical, but as an enzyme reaches a certain temperature, it will be denatured and cease to function, and thus the graph will decrease at a quicker rate of increase. Figure 1.6 shows this * Enzyme concentration An increased amount of enzymes will provide more active sites, thus increasing the rate of reaction. With a fixed amount of substrate present, once every substrate has joined in an enzyme-substrate complex, adding more enzymes will no longer increase the rate of reaction as there is no substrate for the enzyme to bind to. This is shown in Figure 1.7 * Substrate concentration This is the basis of my experiment and is discussed in my prediction section Risk Assessment In this experiment, I will be handling Hydrogen Peroxide, H2O2, which has several health hazards. These are. * Heating may cause an explosion [6] * Contact with combustible material may cause fire [6] * Harmful by inhalation [3] * Harmful if swallowed [3] * Causes severe burns [3] Safety precautions which I will need to apply to Hydrogen Peroxide to ensure a safe practical are. ...read more.

* Electronic scales weighing to an accuracy of 0.01g * The graduated tube measuring volumes to an accuracy of 1mm * Measuring cylinder measuring chemicals to an accuracy of 1mm. * The meniscus in both the graduated tube and measuring cylinder has the potential to create inaccuracies; however I tried to be consistent by measuring from the bottom of the meniscus for every recording. In doing this experiment again, I would use another person to initiate the stop clock whilst I injected H2O2 into the side-arm conical flask and arranged the side-arm tube under the graduated tube. This would eliminate all potential errors in doing this action. The scales I used have a possible uncertainty of 0.005g. This means that to find out the percentage error of a mass, I will use the formula (0.005/change in weight) x 100. In measuring 5g: (0.005/5g) x100 = 0.1% inaccuracy. When measuring the water, Hydrogen Peroxide and Buffer Solution I used a measuring cylinder which was able to take readings with a 0.1cm� accuracy. This means that to find out the percentage error, I will use the formula (0.1/volume) x100. In measuring 10cm3: (0.1/10cm3) x100 = 1% uncertainty Although very small, these were several inaccuracies within my experiment which overall could affect the results which I collect. My investigation could further be improved in many ways. If time and money were no obstacle, I would repeat my experiments more times get rid of any errors and provide a more sound set of results. I would also use more varied concentrations of Hydrogen Peroxide to increase the number or results that I have to compare. I would also have used more accurate, electronic equipment to help me obtain readings as this was a main factor of inaccuracies. For a further investigation I would like to experiment how different types of Catalases are affected by the concentration of Hydrogen Peroxide, for example, the effects of Hydrogen Peroxide on the activity of Liver Catalase. This would help me to further understand the nature of Catalase and would provide considerable additional evidence for me to create my conclusion. ...read more.

This is a very thorough and very good report in to the effect of hydrogen peroxide concentration on the activity of potato catalase.
The introduction is excellent and gives all of the scientific research necessary to understand the report.
The method is effective but the writer has fallen into the trap of assuming the reader knows how to make the concentrations of hydrogen peroxide. To be repeatable the making of each concentration should be described, usually in a table and referred to in the method.
The analysis is too long and many of the graphs are irrelevant to the investigation.
The conclusion reached is supported by primary and secondary data and correctly identifies the idea of limiting factors in the rate of the reaction.