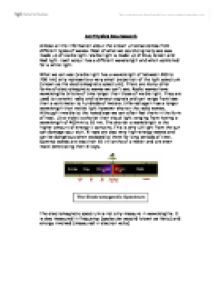 Almost all the information about the known universe comes from different types of waves. Most of what we could originally see was made up of visible light. Visible light is made up of Blue, Green and Red light. Each colour has a different wavelength and when combined for a white light.

What we can see (visible light has a wavelength of between 400 to 700 nm) only represents a very small proportion of the light spectrum (known as the electromagnetic spectrum). There are many other forms of electromagnetic waves we can’t see. Radio waves have wavelengths billions of time longer than those of visible light. They are used to transmit radio and television signals and can range from less than a centimeter to hundreds of meters. Inferred again has a longer wavelength than visible light however shorter the radio waves. Although invisible to the naked eye we can often feel them in the form of heat. Ultra violet is shorter than visual light ranging from having a wavelength of 400nm to 10 nm. The shorter a wavelength is the higher amount of energy it contains. This is why UV light from the sun can damage your skin. X-rays are also very high-energy waves and can be dangerous when exposed to them for long periods of time.

The Very Large Array (VLA) is one of the world's premier astronomical radio observatories. The VLA consists of 27 antennas arranged in a huge "Y" pattern up to 36 km (22 miles) across -- roughly one and a half times the size of Washington, DC. 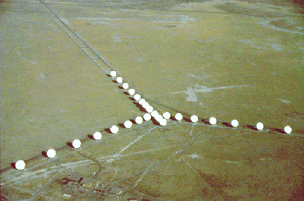 Radio telescopes look toward the heavens at planets and comets, giant clouds of gas and dust, and stars and galaxies. By studying the radio waves originating from these sources, astronomers can learn about their composition, structure, and motion. Radio astronomy has the advantage that sunlight, clouds, and rain do not affect observations.

Our Sun emits light at all the different wavelengths in electromagnetic spectrum, but it is ultraviolet waves that are responsible for causing our sunburns. To the left is an image of the Sun taken at an Extreme Ultraviolet wavelength - 171 Angstroms to be exact. (An Angstrom is a unit length equal to 10-10 meters.) This image was taken by a satellite named SOHO and it shows what the Sun looked like on April 24, 2000.

Gamma-rays travel to us across vast distances of the universe, only to be absorbed by the Earth's atmosphere. Different wavelengths of light penetrate the Earth's atmosphere to different depths. Instruments aboard high-altitude balloons and satellites like the Compton Observatory provide our only view of the gamma-ray sky.

Gamma-ray astronomy did not develop until it was possible to get our detectors above all or most of the atmosphere, using balloons or spacecraft. The first gamma-ray telescope, carried into orbit on the Explorer XI satellite in 1961, picked up fewer than 100 cosmic gamma-ray photons!

Unlike optical light and X-rays, gamma rays cannot be captured and reflected in mirrors. The high-energy photons would pass right through such a device. Gamma-ray telescopes use a process called Compton scattering, where a gamma-ray strikes an electron and loses energy, similar to a cue ball striking an eight ball.

If you could see gamma-rays, the night sky would look strange and unfamiliar.

The familiar sights of constantly shining stars and galaxies would be replaced by something ever-changing. Your gamma-ray vision would peer into the hearts of solar flares, supernovae, neutron stars, black holes, and active galaxies. Gamma-ray astronomy presents unique opportunities to explore these exotic objects. By exploring the universe at these high energies, scientists can search for new physics, testing theories and performing experiments which are not possible in earth-bound laboratories.