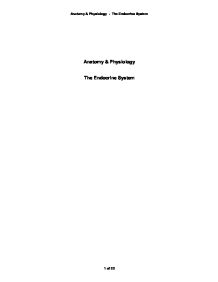 Anatomy & Physiology The Endocrine System Task 1 1. List the major endocrine glands of the body. Describe their structure and location. Adrenal Gland (Medulla and Cortex). Thyroid Gland. Para-Thyroid Gland. Pituitary (3 Lobes - Anterior, Median and Posterior). Testes and Ovaries. Placenta. Pineal Gland. Pancreas1. Name of Gland Structure Location Adrenal Gland The adrenal gland has three main sections. At the surface of the gland is a thick capsule, which binds the gland to the kidney surface and protects its glandular tissue below. The adrenal glands are paired glands, with each one sitting atop each kidney and are embedded in the fat enclosing the kidney. The next layer is the cortex which has three identifiable layers, the zona glomerulosa, the zona fasciculate and the zona reticularis. The inner most layer is the medulla which has a rich blood supply and is composed of nerve cells. Thyroid Gland The thyroid gland consists of two lateral lobes, called the left and right lateral lobes. A bridge of tissue connects the two lobes, called the isthmus. Internally, the thyroid gland is made-up of hollow, spherical follicles. The thyroid gland is shaped similar to shield. It is found in the neck, in front of the trachea and below the larynx. Name of Gland Structure Location Parathyroid Gland The four parathyroid glands are each about the sixe of a pea. A connective tissue capsule covers them. The same arteries and veins that supply the thyroid gland also bring blood to and away from the parathyroid glands. On the dorsal surface of the thyroid gland are the four parathyroid glands. The parathyroids are found in the connective tissue surrounding the posterior surface of the thyroid gland lobes. Pituitary Gland The pituitary gland in adults is split into two areas. The anterior and posterior lobes. A third region of the pituitary gland called the pars intermedia shrivels up during childhood and ceases to exist in adults. ...read more.

Thyroxine (T4) is secreted by the follicular cells of the thyroid gland. T4 is the body's main metabolic hormone, regulating the rate of oxygen use by cells, and the generation of body heat. In the liver, T4 promotes the metabolism of glucose into pyruvate, the production of sugars from fats, and increases the release of cholesterol. In the digestive system, T4 increases secretion of digestive juices, and promotes smooth muscle contractions for motility. In skeletal and in cardiac muscles, T4 promotes normal development, tone and function. In bones, T4 promotes growth and coordinates maturation with age. In the nervous system, T4 promotes normal development of the system during youth, and maintains its functions during adulthood. In the reproductive system, T4 promotes the ability for conception, and secretion of milk by the breasts. In the skin, T4 promotes hydration, secretions of exocrine glands, and the growth of hair. Simple goitre is an enlargement of the thyroid with no cancer or inflammation and normal thyroid function. Thyroxine treatment has been used for years in the hope that it would stop simple goitres from growing. The principle of this treatment is to give thyroxine in order to decrease the TSH by negative feedback. The results of studies have been equivocal. Small goitres are more responsive to thyroxine therapy than large ones but once the treatment is stopped the goitre returns to its pre-treatment size. There is no evidence that thyroxine treatment changes the progression of a simple goitre. Thyroxine treatment is not without its problems. Small cancers can shrink initially on thyroxine treatment only to enlarge later. Thyroxine may produce the early stages of hyperthyroidism with the risk of accelerated osteoporosis in postmenopausal women. Exophthalmic Goitre is defined by the Oxford Medical Dictionary as any of the various forms of hyperthyroidism in which the thyroid gland is enlarged and exophthalmos is present. Where an exophthalmos is an abnormal protrusion of the eyeball in the orbit when observed from the side. ...read more.

are: * Neurons in the hypothalamus secrete thyroid releasing hormone (TRH), which stimulates cells in the anterior pituitary to secrete thyroid-stimulating hormone (TSH). * TSH binds to receptors on epithelial cells in the thyroid gland, stimulating synthesis and secretion of thyroid hormones, which affect probably all cells in the body. * When blood concentrations of thyroid hormones increase above a certain threshold, TRH-secreting neurons in the hypothalamus are inhibited and stop secreting TRH. 2 (b) Positive feedback mechanisms control self-perpetuating events that can be out of control and do not require continuous adjustment. In positive feedback mechanisms, the original stimulus is promoted rather than negated. Positive feedback increases the deviation from an ideal normal value. Unlike negative feedback that maintain hormone levels within narrow ranges, positive feedback is rarely used to maintain homeostatic functions. An example of positive feedback can be found in childbirth. The hormone oxytocin stimulates and enhances labour contractions. As the baby moves toward the vagina, pressure receptors within the cervix send messages to the brain to produce oxytocin. Oxytocin travels to the uterus through the bloodstream, stimulating the muscles in the uterine wall to contract stronger (increase of ideal normal value). The contractions intensify and increase until the baby is outside the birth canal. When the stimulus to the pressure receptors ends, oxytocin production stops and labour contractions cease. 3. Insulin is a hormone produced by the �-cells in the Islets of Langerhans in the pancreas. It is released in reaction to high blood sugar levels. Insulin is a protein and deamination occurs in the liver. An amino group (NH2) is removed from the protein, converting it into ammonia by this process. Ammonia is toxic, so enzymes work to transform it to urea by addition of carbon dioxide in the Urea Cycle. Urea can then diffuse into the blood, which travels to the kidneys. The kidneys eliminate this waste from the blood and it is then excreted via urine. 1 The pancreas is an exocrine and endocrine gland. ?? ?? ?? ?? Anatomy & Physiology - The Endocrine System 1 of 22 ...read more.