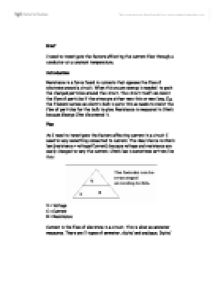 The factors affecting the current flow through a conductor at a constant temperature.

I need to investigate the factors affecting the current flow through a conductor at a constant temperature.

As I need to investigate the factors affecting current in a circuit I need to vary something connected to current. The ideal choice is Ohm’s law (resistance = voltage/Current) because voltage and resistance are easily changed to vary the current. Ohm’s law is sometimes written like this:

Current is the flow of electrons in a circuit. This is what an ammeter measures. There are 2 types of ammeter, digital and analogue. Digital readers are easier to read because the current is displayed as a number.

I know that the results will be accurate because having a second experiment will check them. Any anomalous readings will hopefully be averaged out and will not have a significant impact on the final result.

The measurements will be recorded in ohm’s, volts, and amp’s and also in degrees.

I will hopefully get a range of 0-1 amps during the experiment.

I predict that when the resistance in the circuit increases the current and the voltage will decrease, according to Ohm’s law (resistance = voltage/Current).

As the resistance increases there will be more ‘hurdles’ for the electrons to conquer as they travel around the circuit, and this is why the voltage and current will decrease. As long as the temperature remains constant this hypothesis will be accurate. The resistance will be proportional to the current.

If I had the chance to conduct an experiment like this again I would change the voltage as well whilst keeping the resistance and current the same to prove Ohm’s law correct. I would then be able to cross-reference the results and make a full investigation of the brief. The method for the next experiment is shown below.