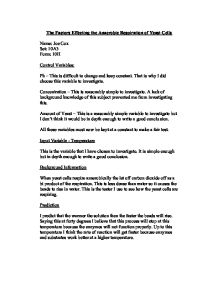 The Factors Effecting the Anaerobic Respiration of Yeast Cells

The Factors Effecting the Anaerobic Respiration of Yeast Cells Name: Joe Cox Set: 10A3 Form: 10H Control Variables; Ph - This is difficult to change and keep constant. That is why I did choose this variable to investigate. Concentration - This is reasonably simple to investigate. A lack of background knowledge of this subject prevented me from investigating this. Amount of Yeast - This is a reasonably simple variable to investigate but I don't think it would be in depth enough to write a good conclusion. All these variables must now be kept at a constant to make a fair test. Input Variable - Temperature This is the variable that I have chosen to investigate. It is simple enough but in depth enough to write a good conclusion. Background Information When yeast cells respire anaerobically the let off carbon dioxide off as a bi product of the respiration. This is less dense than water so it causes the beads to rise in water. This is the tester I use to see how the yeast cells are respiring. Prediction I predict that the warmer the solution then the faster the beads will rise. ...read more.

A problem with my prediction is that it stated that at forty degrees the cells would denature but the results and graph showed that the cells denatured at 45 degrees C. This is what the dip in the graph has shown. This could be for various reasons, the most likely reason is that the cells did not actually experience temperatures of those stated. The water in the water bath would lose heat before it reached the beads, this is due to temperature travelling through the glass and losing heat energy on the way. An alternative explanation for this is the beads were not subject to these temperatures because they were insulated by other beads surrounding them. The added test of the beads at 45�C was a very beneficial us. It enabled us to find out the optimum temperature that the beads respired at. It also enabled us to work out the temperature at which the beads denatured; this was a temperature around the 45�C area. We cannot say for sure due to the cooling baths losing heat energy and the insulating properties of the beads. Up to the forty five-degree point the yeast balls respired more efficiently at a higher temperature, this was due to the increased energy the particles were given. My prediction was proved mainly correct. ...read more.