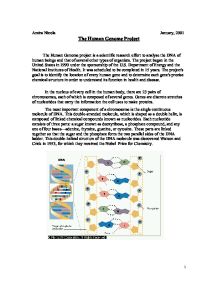 Amira Nicola January, 2001 The Human Genome Project The Human Genome project is a scientific research effort to analyse the DNA of human beings and that of several other types of organism. The project began in the United States in 1990 under the sponsorship of the U.S. Department of Energy and the National Institutes of Health. It was scheduled to be completed in 15 years. The project's goal is to identify the location of every human gene and to determine each gene's precise chemical structure in order to understand its function in health and disease. In the nucleus of every cell in the human body, there are 23 pairs of chromosomes, each of which is composed of several genes. Genes are discrete stretches of nucleotides that carry the information the cell uses to make proteins. The most important component of a chromosome is the single continuous molecule of DNA. This double-stranded molecule, which is shaped as a double helix, is composed of linked chemical compounds known as nucleotides. Each nucleotide consists of three parts: a sugar known as deoxyribose, a phosphate compound, and any one of four bases-adenine, thymine, guanine, or cytosine. These parts are linked together so that the sugar and the phosphate form the two parallel sides of the DNA ladder. ...read more.

Very detailed physical maps that indicate the precise order of cloned pieces of a chromosome are required to determine the actual sequence of nucleotides. The Human Genome Project most commonly uses the DNA sequencing method developed by the British biochemist and Nobel laureate Frederick Sanger. In Sanger's method, specific pieces of DNA are replicated and modified so that each ends in a fluorescent form of one of the four nucleotides. In modern automated DNA sequencers, the modified nucleotide at the end of such a chain is detected with a laser, and the exact number of nucleotides in the chain is determined. This information is then combined by computer to reconstruct the sequence of base pairs in the original DNA molecule. Duplicating DNA accurately and quickly is of critical importance to both mapping and sequencing. Scientists first replicated fragments of human DNA by cloning them in single-celled organisms that divide rapidly, such as bacteria or yeast. This technique can be time consuming and labour-intensive. In the late 1980s, however, a revolutionary method of reproducing DNA, known as the polymerase chain reaction (PCR), came into widespread use. PCR is easily automated and can copy a single molecule of DNA many millions of times in a few hours. ...read more.

This kind of information is not very useful for individuals, who would like to know whether they actually have or will get a particular disease, and what steps, if any, they ought to take to protect their health. But probabilities are very useful for predicting how many people in a group will contract cancer or Alzheimer's disease, and so insurance companies and potential employers may well be very interested in measuring their risks using genetic tests. The genetic codes that will be used in tests to predict health risks often are, and will continue to be first identified by research on particular groups. And when we are able to change the future through the alteration of our very genes, the challenge is to think not only for ourselves, but also about how our decisions will affect those who come after us. Finally, the genome project was carried out mostly in publicly-funded research institutions. However, some of it was done in private laboratories. These labs have registered as patents the sequences they have discovered. One of the questions that future researchers have to face is that of royalties to be paid if any research is to be undertaken on any of the patented sequences. It seems that some understanding has been reached but the question of intellectual rights is another problem to be considered if there are not enough already. 1 ...read more.

This is a very well researches and detailed account of the human genome project. It includes very good descriptions of biochemical techniques