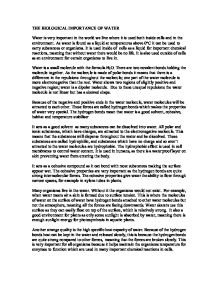 The importance of water in biological processes

THE BIOLOGICAL IMPORTANCE OF WATER

Water is very important in the world we live where it is used both inside cells and in the environment. As water is found as a liquid at temperatures above 0°C it can be used to carry substances or organisms. It is used inside of  cells as a liquid for important chemical reactions, meaning that without water there would be no life. It is also used outside of cells as an environment for certain organisms to live in.

Because of the negative and positive ends in the water molecule, water molecules will be attracted to each other. These forces are called hydrogen bonds which makes the properties of water very special. The hydrogen bonds mean that water is a good solvent, cohesive, habitat and temperature stabiliser

It acts as a good solvent  as many substances can be dissolved into water. All polar and ionic substances, which have charges, are attracted to the electronegative molecule. This means that the substances will disperse throughout the water and be dissolved. These substances are called hydrophilic, and substances which have no charge and so aren’t attracted to the water molecules are hydrophobic. The hydrophobic effect is used in cell membranes to control water content. It is used in humans, as there is a waterproof layer on skin preventing water from entering the body.

Many organisms live in the water. Without it the organisms would not exist . For example, when water meets air a skin is formed due to surface tension. This is where the molecules of water on the surface of water have hydrogen bonds attached to other water molecules but not the atmosphere, meaning all the forces are facing downwards. Water skaters use this surface as they can easily float on top of the surface, which is relatively strong.  It also a good environment for plants as only some sunlight is absorbed by water, meaning there is enough sunlight energy for photosynthesis in aquatic plants.

Another strange quality is the high specific heat capacity of water. Because of the hydrogen bonds heat can be kept in the water and released slowly, this is because the hydrogen bonds are quite strong compared to other forces,  meaning that the forces are broken slowly. This is very important for all organisms because it helps maintain the organisms temperature for enzymes to function which are used in many important chemical reactions in cells.

Water also has a latent heat of vaporisation which also helps maintain an organisms temperature, an optimum temperature is needed for enzymes and therefore important chemical reactions. It means that a lot of heat energy is needed to evaporate water, so when it does evaporate the energy is released from an organism giving a cooling effect, this is the purpose of sweat.

It also has a high latent heat of fusion which means that water will not freeze over short periods of time in cells and habitats.

Water is quite dense, more dense than the atmosphere which means it can support aquatic animals. However, the density of the solid is less. Most compounds are more dense when solid because the particles are able to get closer together. However, when water is a liquid the hydrogen bonds are forming and reforming as the particles have space to move. When it is frozen the hydrogen bonds form a lattice with big gaps between the particles, meaning it is less dense than the liquid, and can float on the liquid water. This can provide insulation for aquatic animals living in harsh conditions.

Water is used as a product in photosynthesis which creates energy for plants, it used to create hydrogen ions when the water molecule is split. It is also used for respiration to create energy. Without these two reactions many organisms would cease to exist.

In conclusion without water life would not be the same if there was any life at all. Chemical reactions wouldn’t occur in cells, there wouldn’t be a universal solvent and aquatic animals would not be able to survive. There is no molecule to take the place of water; it is unique.