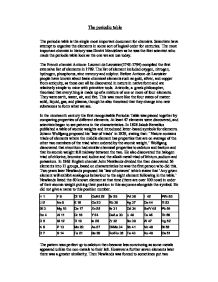 The periodic table The periodic table is the single most important document for chemists. Scientists have attempt to organize the elements in some sort of logical order for centuries. The most important chemist in history was Dmitri Mendeleev as he was the first scientist who made the periodic table look as the one we are use today. The French chemist Antione- Laurent de Lavoisier(1743-1794) compiled the first extensive list of elements in 1789. The list of element included oxygen, nitrogen, hydrogen, phosphorus, zinc mercury and sulphur. Before Antione-de Lavoisier people have known about basic chemical elements such as gold, silver, and copper from antiquity, as these can all be discovered in nature in native form and are relatively simple to mine with primitive tools. Aristotle, a greek philosopher, theorised that everything is made up of a mixture of one or more of four elements. They were earth, water, air, and fire. This was more like the four states of matter: solid, liquid, gas, and plasma, though he also theorised that they change into new substances to form what we see. In the nineteenth century the first recognizable Periodic Table was pieced together by comparing properties of different elements. ...read more.

For example, iodine has a lower relative atomic mass than tellurium, so it should come before tellurium in Mendeleev's table - but in order to get iodine in the same group as other elements with similar properties such as fluorine, chlorine and bromine, he had to put it after tellurium, so breaking his own rules The final modern periodic table arrangement was finally proposed by Henry Moseley in 1913 by ordering elements by their atomic number instead of their mass. Using atomic number instead of atomic mass as the organizing principle was first proposed by the British chemist Henry Moseley in 1913, and it solved anomalies like this one. Iodine has a higher atomic number than tellurium. Even though he didn't know why, Mendeleev was right to place it after tellurium after all. First he put elements into their correct places in the table. In some cases the relative atomic mass had been wrongly calculated by others. By correcting the relative atomic mass he put the element in the correct place. At the time, relative atomic masses were laboriously determined using the formula atomic weight = equivalent weight x valency The combining (or equivalent) weights were generally accurate but sometimes an element was given the wrong valency. ...read more.

It is interesting to speculate whether de Boisbaudran was pleased or irritated by this. The table compares Mendeleev's predictions with de Boisbaudran's discovery. Eka-aluminium (Ea) Gallium (Ga) Atomic weight About 68 69.72 Density of solid 6.0 g/cm3 5.9 g/cm3 Melting point low 29.78oC Valency 3 3 Method of discovery Probably from its spectrum Spectroscopically Oxide Formula Ea2O3, density 5.5 g/cm3. Soluble in both acids and alkalis. Formula Ga2O3, density 5.88 g/cm3. Soluble in both acids and alkalis. Within the next ten years Swede Lars Nilson (1879) identified scandium, predicted by Mendeleev as eka-boron and German Clemens Winkler (1886) discovered germanium which he realised was Mendeleev's eka-silicon. These discoveries established the acceptance of the Russian's table, although two other elements whose properties were predicted were not discovered for 50 years. One thing that Mendeleev did not predict was the discovery of a whole new Group of elements, the noble gases, by the Scot William Ramsay and co-workers during the last decade of the 19th century. Mendeleev was at first dismayed by this but before he died in 1907 realised that Ramsay's discoveries were further proof of the Periodic Table, not a contradiction. Ramsay was awarded a Nobel Prize for discovering five elements. Mendeleev never received that honour. However, an element, atomic number 101, has been named after Mendeleev, an even rarer distinction. This is surely deserved by the original formulator of the Periodic Table. ...read more.