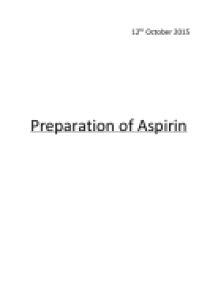 ï»¿12th October 2015 Preparation of Aspirin Abstract The purpose of this experiment was to prepare a sample of Aspirin and measure its boiling point. Reacting salicylic acid with acetic anhydride in excess with the presence of a catalyst sulphuric acid. Through a sequence of heating, filtering and recrystallizing the end product of making aspirin was positive and the measuring of its boiling point was successful. The sample was purified and the percentage yield was calculated to be 61.2% and to measure the purity of the sample the melting point was considered which came to be 122°c. Introduction The chemical name for Aspirin is Acetylsalicylic acid. Aspirin is known to relieve pain and is an over the counter drug. Salicylic acid was first found in the bark of the willow tree, which used to be used for treating fever and a variety of illnesses. However scientists soon began to realise that the acid used to thin the stomach lining and burn throats. (Ling, 1994) Not long after a German scientist, Felix Hoffman, derived a pain reliever that did not produce the same side effects as salicylic acid, and is credited for the finding of Aspirin. (Ling, 1994) Uses of Aspirin Another use of aspirin is people having to take it to thin the blood, which reduces the chance of unnecessary blood clots to form; therefore in the long term taking an aspirin everyday will prevent heart attacks and strokes in high risk patients. ...read more.

Lastly measure the yield and the melting point of the crystals. Diagram of experiment: On paper. Hazard and Risk Analysis Risks Hazards Precautions Salicylic acid If the acid comes to contact with skin, there can be risk of burns. Swallowing can cause major internal disruptions, vomiting and diarrhoea, dizziness etc. The acid could be inhaled as well which could also cause problems with the respiratory tract. To keep toxic fumes from getting inhaled do all steps in a fume cupboard. To prevent the acid touching any skin, gloves, suitable clothing and lab coats must be warn at all times. In addition goggles must be worn to prevent eye damage. Acetic anhydride Very corrosive and causes severe burns. Allowing eye or skin contact would cause irritation, redness and burns. Inhaling the substance can cause shortness of breath and inflammation. The more serious case can cause blistering. Use in fume cabinet as it is a very toxic smelling gas. If unknowingly toxic gases are released make sure the area is being well ventilated. Precautions such as wearing protective goggles, lab coats and disposable gloves. Rinse all lab equipment after use, to ensure other colleagues use contaminated equipment. Sulfuric acid A clear colourless liquid, highly corrosive, very toxic, fatal if inhaled, highly reactive, reacts violently with water. ...read more.

The equipment used will have left over product on them, which would be a potential source of error and a low the yield. Such as trying to transfer all the sample from the round bottom flask in to the beaker, or residue left on the glass rod. Again some errors are unavoidable and are just minimised as in this situation. Measuring the melting point came to 135°C (Haynes, 2014) but the experimental melting point was 122°C. The melting points show a small range, but a larger difference between the theoretical and actual melting points. There can be many reasons as to why there was a difference between the melting points. As the yield is not 100% some of the product may have been lost when transferring the product from one container to another. All reactants may not have all reacted. Conclusion The experiment as a whole was successful and the reactants react together to form Aspirin, however if the experiment was to be done again a way to increase the percentage yield would make it feasible would make the experiment more commendable. For example when measuring the melting point the temperature there should be more control over the temperature and humidity of the surroundings, and kept at a minimum to stop the reactants reacting with vapour in the air. ...read more.