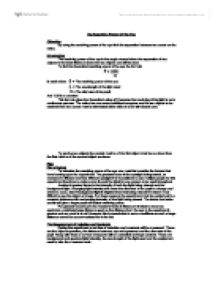 The Resolving Power Of The Eye

The Resolving Power Of The Eye

By using the resolving power of the eye find the separation between two cones on the retina.

The resolving power of the eye is the angle created when the separation of two objects is the least distance where the two objects can still be seen.

To find the theoretical resolving power of the eye the formula:

λ= The wavelength of the light used

D = The diameter of the pupil

This formula gives the theoretical value of θbecause the receiving of the light is not a continuous process. The retina has numerous individual receptors and for two objects to be resolved then two cones must be stimulated either side of ad un-stimulated cone.

To resolve two objects the central maxima of the first object must be no closer than the first minima of the second object as above.

To calculate the resolving power of the eye one must first consider the factors that have bearing upon the experiment. The greatest factor is the

In total darkness with the LED turned on behind the card stand or kneel so that the two apertures are at eye level. From close to the card work gradually backwards until the two lights can only just be defined and appear separate. Mark this point on the floor for measuring later when in full light. Continue this process changing the holes used for the different readings on different separations. Repeat the whole experiment three times.

Safety is not enforced strongly as the experiment has few dangerous elements. However, it is common sense to stay safe by not putting electrical equipment next to or in a sink in use as is not running around in the darkened lab.

To calculate the theoretical value; θ, of the resolving power of the eye use the wavelength of the light by the LED and the measured diameter of the pupil. This will give a reference value for the calculated resolving power; this can be used to check х, as х cannot exceed θ.Х, the actual resolving power, can be calculated, in radians, by using separation of the apertures and the distance between the eye and apertures. By rearranging s = dx you get x = s/d.

My final result for the separation of the two cones, 3.15 x 10-6m ± 2.65% was a factor of 10 out from the literature value of 50μm. This could be caused by an error in calculation, measurement or inaccuracy caused by the number of assumptions that I used.

The final result for the separation of two cones on the retina is dependant upon the diameter of the eye as a 10mm difference in this could double or half the answer, for the theoretical value of θ the pupil diameter is the most important factor.

The techniques I used were suitable for this experiment but could have been vastly improved, the conclusions drawn, mainly the cone separation, were very reliable as for such a small distance a factor of ten out is very accurate. A large number of errors and inaccuracies can be eliminated from the experiment. Random errors can be removed completely and systematic errors reduced. By carrying out the experiment in fully darkened conditions with no light source at all, time of day and conditions outside will have no effect. Also by performing the experiment in one afternoon after acclimatizing (sitting in the dark) the pupil diameter will be as large as possible and constant plus any tiredness should be alleviated.