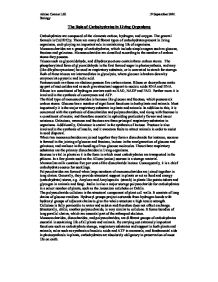 The Role of Carbohydrates in Living Organisms

The Role of Carbohydrates in Living Organisms Carbohydrates are composed of the elements carbon, hydrogen, and oxygen. The general formula is Cx(H2O)y. There are many different types of carbohydrates present in living organisms, each playing an important role in maintaining life of organisms. Monosaccharides are a group of carbohydrates, which include simple sugars such as glucose, fructose and galactose. Monosaccharides are classified according to the number of carbon atoms they possess. Trioses such as glyceraldehyde, and dihydroxyacetone contain three carbon atoms. The phosphorylated form of glyceraldehyde is the first formed sugar in photosynthesis, and may (like dihydroxyacetone) be used as respiratory substrate, or is converted to starch for storage. ...read more.

Galactose, mannose and fructose are three principal respiratory substrates in organisms. Additionally, Galactose is central in the synthesis of lactose. Fructose is also involved in the synthesis of insulin, and it sweetens fruits to attract animals in order to assist in seed dispersal. When two monosaccharides are joined together they form a disaccharide for instance, sucrose is formed in the joining of glucose and fructose, lactose in the amalgamation of glucose and galactose, and maltose in the bonding of two glucose molecules. These three respiratory substrates are the primary disaccharides in living organisms. Sucrose is vital in plants as it is the form in which most carbohydrates are transported in the phloem. ...read more.

It consists of long chains of glucose residues. Hydroxyl groups project outwards from hydrogen bonds with hydroxyl groups of adjacent chains to give the whole structure a high tensile strength. Cellulose is fully permeable to water and solutes and therefore does not effect exchange. Structurally, chitin, another polysaccharide, is very similar to cellulose. It forms bundles of long parallel chains, which are essential part of the arthropod skeleton. Monosaccharides, disaccharides, and polysaccharides, are different groups of carbohydrates essential in sustaining life of all plants and animals. By carrying out extremely important functions such as carbohydrate storage, respiratory substrates and support in both plants and animals, roles such as synthesis of nucleic acids and ATP in mammals, and fundamental aids in photosynthesis in plants, carbohydrates are absolutely obligatory in preservation of most life on earth. Adrian Conner L6E 19 September 2001 Biology ...read more.

A very good account of the role of carbohydrates. It would benefit from diagrams of the structure of each variety of carbohydrate, but other than that very comprehensive. 4 stars.