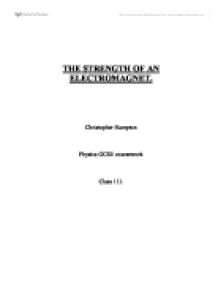 The strength of an electromagnet.

THE STRENGTH OF AN ELECTROMAGNET.

The object of this project is to plan and carry out a simple, fair, controlled and safe experiment to determine the factors that control the strength of an electromagnet. I know from previous years work that the strength of an electromagnet is determined by the number of coils of wire used, by the amount of current fed through the wires and that by putting a piece of iron or steel in the middle of the coil that the strength is increased.

In this project I will investigate the pattern by which changing the amount of current flowing through the coil will change the strength of the electromagnet. I will need to make the experiment fair, simple, reproducible and safe.  I will use the ability of an electromagnet to pick up a metal object as the measure of its strength. A panel pin is a small nail that is made of metal and so will be attracted to a magnet. The number of panel pins the electromagnet could lift is therefore a measure of magnetic strength and as panel pins are small it would be better to weigh the amount lifted, although it would also be possible to count the number lifted.

From these results you can clearly see that when iron is used as the core material a stronger electromagnet results when there is a current flowing in the circuit. A steel core results in a less strong electromagnet. The iron core does stay magnetized after the current is switched off but to a much lesser degree that a steel core. Thus a steel core results in a weaker electromagnet that stays magnetized to a much greater extent after the current has been switched off. The reason for this is that the domains in iron are more freely mobile than in the steel alloy. In iron when the current flows all the domains line up and increase the power of the magnet a lot, but then they are free to return to an almost random pattern when the current stops flowing. In the steel core it is more difficult for the domains to line up with the current, so the amplification of the magnetic power is less, but when the current is switched off it is more difficult for the domains to move and many of them remain lined up, leaving an residual magnetic effect that retains more of the panel pins. This

The experiment could be improved by taking more readings at each point. This would increase the accuracy of the average readings. Also you could use a new set of panel pins for each experiment so that they do not get magnetized and so give a slight over-reading. It would also be possible to completely demagnetize the iron core between each experiment, because although the residual magnetism is less with iron than steel, there is still some residual effect that will carry over from one reading to the next. The temperature control was not prefect. The magnet and coil tended to warm up when the power was on and then cool down when it was turned off. It would have been better if the temperature was constant throughout. Finally you could use a different type of weight such as iron filings, to prevent dropping of the pins before weighing them. Iron filings weigh less per individual piece so may give a more accurate result, although they are difficult to use because they are so light and may be worse. Another preliminary experiment would answer this question.