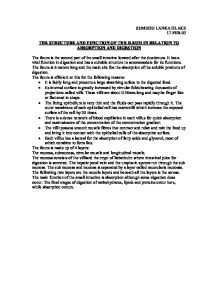 The structure and function of the ileum in relation to absorption and digestion.

SUMUDU LANKATILAKE 17-FEB-03 THE STRUCTURE AND FUNCTION OF THE ILEUM IN RELATION TO ABSORPTION AND DIGESTION The ileum is the second part of the small intestine located after the duodenum. It has a vital function in digestion and has a suitable structure to accommodate for its functions. The ileum is 6 meters long and the main site foe the absorption of the soluble products of digestion. The ileum is efficient at this for the following reasons: * It is fairly long and presents a large absorbing suface to the digested food. * Its internal surface is greatly increased by circular folds bearing thousands of projections called villi. These villi are about 0.56mm long and may be finger like or flattened in shape. * The lining epithelium is very thin and the fluids can pass rapidly through it. ...read more.

The hepatic potal vein and the umphatic system run through the sub mucosa. The sub mucosa and mucosa is separated by a layer called muscularis mucosae. The following two layers are the muscle layers and beneath all the layers is the serosa. The main function of the small intestine is absorption although some digestion does occur. The final stages of digestion of carbohydrates, lipids and proteins occur here, while absorption occurs. Carbohydrates in the form of monosaccharides and amino acids are absorbed partly by diffusion and partly my active transport. Soon after a meal there will be a higher concentration of monosaccharides and amino acids in the ileum, and so a concentration gradient will exist and diffusion of these molecules will occur across the mucosal epithelium in the blood capillaries. ...read more.

For digestion that occurs in the ileum intestinal juice is secreted by the small intestine and the digestion occurs in the small intestine itself. The intestinal juice contains maltase, sucrase, lactase, enterokinase, aminopeptidase, lipase, nucleotidase, mucus. Each are an enzyme which have a specific molecule to act on. Maltase acts on maltose and converts it into glucose. Sucrase acts on sucrose and breaks it down into glucose and fructose. Lactase acts on lactose and breaks it down into glucose and galactose. Enterokinase acts on trypsinogen and breaks it down to trypsin. Aminopeptidase acts on peptides and converts it into amino acids. Lipase acts on fats and converts it into fatty acids and monoglycerides. Nucleotidase breaks down nucleotides and mucus is also secretd for the lubrication of the food mass. The product molecules are all easier to absorb than their precursor molecules. The ileum of the small intestine eventually leads into the large intestine for further absorption. ...read more.

Much of the relevant information is included in this essay but its overall structure needs some reworking. A clear distinction between digestion and absorption would make it easier to follow. An alternative approach is to deal with each of the four layers of the ileum wall in turn, relating their structure and function.
Finally, the different cell types of the intestinal epithelium together with their functions was not covered in enough detail. Paneth cells, goblet cells, absorptive cells (enterocytes) deserve mention at A' Level.
This is a good example of an essay which needs careful planning before putting pen to paper (or fingers to keyboard.)