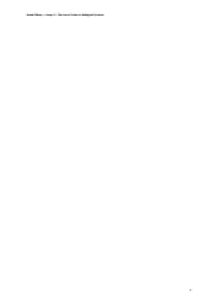 The Use of Water in Biological Organisms.

﻿Daniel Elleray ? Group 2 ? The Use of Water in Biological Systems ________________ The Use of Water in Biological Organisms. 1. Topic One: the way that water forms hydrogen bonds and links to other cells is important. Talk about how most living organisms are made up of 69% water. Link this is with temperature regulation as well as other thermal properties of water. 1. Topic Two: Talk about the importance of the cell membrane in eukaryotic cells, what it?s made up of including hydrophilic and hydrophobic phospholipids. Explain how this is importance in cell absorption, and how the cells move and absorb nutrients using osmosis. This might link in with cohesion/adhesion (water transport). 1. Topic Three: Talk about how proteins, carbs and lipids owe their existence to water, and how water can also be used to break them down (hydrolysis reactions) ...read more.

atom covalently bonded to two hydrogen (H) molecules resulting with the chemical formulae H2O. Water contains 10 protons and 10 neutrons leaving it electrically neutral. However, as the nucleus of the oxygen atom attracts the electron of each hydrogen atom it makes the molecule polar. This intermolecular attraction of atoms (dipole) is known to allow formation of hydrogen bonds, which in large quantities are very robust in their lattice framework. This example of cohesion contributes to water’s thermodynamic properties. This high specific heat capacity gives rise to the highly differentiating temperatures of its three states of matter (gas at 100°c, solid at 0°c and liquid at standard temperature and pressure) which are vital in maintaining regulated environments for cells and organisms. With this in mind, it is worth noting that cells have an optimal temperature and pH by which they can function as almost every chemical reaction in a cell is catalysed by a class of proteins called enzymes [Freeman & Co 2001 p. ...read more.

Too little kinetic energy means less frequency of enzyme and substrate collisions, lowering the reaction rate. Too high of a temperature and the enzyme structure begins to denature, the hydrogen and ionic bonds begin to break. The active site will eventually be unable to accommodate a substrate and the enzymes function will be diminished. Overall, we can see a direct link between the relationships of water, its thermal properties and its effect on chemical reactions. The same principle applies to the pH of solution where enzymes exist, if the conditions are too acidic then the enzyme becomes denatured, or Reference Gareth Williams (2000). Advanced Biology for You. Cheltenham: Stanley Thorne Ltd. W.H. Freeman & Co (2001). Molecular Cell Biology. New York: Media Connected Clark, David P (2009). Molecular Biology. Burlington, MA, USA: Elsevier Science & Technology. ...read more.