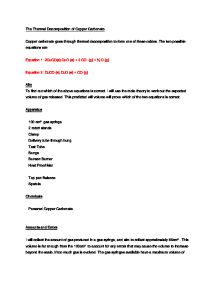 The Thermal Decomposition of Copper Carbonate Copper carbonate goes through thermal decomposition to form one of these oxides. The two possible equations are: Equation 1: 2CuCO(s) CuO (s) + 2 CO (g) + 1/2 O (g) Equation 2: CuCO (s) CuO (s) + CO (g) Aim To find out which of the above equations is correct. I will use the mole theory to work out the expected volume of gas released. This predicted will volume will prove which of the two equations is correct. Apparatus 100 cm� gas syringe 2 retort stands Clamp Delivery tube through bung Test Tube Bungs Bunsen Burner Heat Proof Mat Top pan Balance Spatula Chemicals Powered Copper Carbonate Amounts and Errors I will collect the amount of gas produced in a gas syringe, and aim to collect approximately 80cm� . This volume is far enough from the 100cm� to account for any errors that may cause the volume to increase beyond the scale, if too much gas is evolved. The gas syringes available have a maximum volume of 100cm�, hence why the chosen volume is lower than 100cm�. There is also the possibility of the gas expanding in the heat, and resulting in the gas having a larger volume than the available volume in the gas syringe. ...read more.

in a Petri dish Record the Mass. Transfer the Copper Carbonate into the boiling tube and place a bung into the top of the boiling tube. Fix the test tube to the retort stand, using a clamp. Make sure the test tube and clamp is fixed correctly to the retort stand. Attach the gas syringe to the delivery tube (from the test tube), making sure that the syringe is fully depressed. Light the Bunsen Burner, and open the air hole to produce a blue flame. Make sure that the flame is under the powder in the test tube. Apply heat to the test tube Continue heating the test tube until the powder turns black and until the volume of gas remains constant. Once the powder has turned black, turn the Bunsen burner off, and allow all the equipment to cool. Once the plunger on the gas syringe has stopped moving, record the volume of gas given off, by looking at the scale along the side of the syringe. The reaction will be complete when the volume in the gas syringe remains constant. It is important that the gas is at room temperature for the results to be accurate. Repeat the experiment another 2 times to eradicate any anomalies. ...read more.