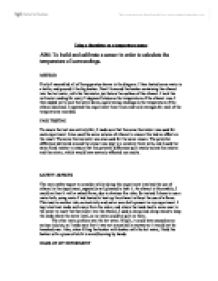 To build and calibrate a sensor in order to calculate the temperature of surroundings.

Using a thermistor as a temperature sensor

AIM: To build and calibrate a sensor in order to calculate the temperature of surroundings.

To ensure the test was entirely fair, I made sure that the same thermistor was used for each experiment. I also used the same volume of ethanol to ensure this had no effect on the result. The same thermometer was also used for the same reason. The potential difference delivered around the circuit was kept to a constant three volts, and I used the same fixed resistor to ensure that the potential difference split evenly across the resistor and thermistor, which would have severely affected my results.

The main safety aspect to consider whilst doing this experiment involved the use of ethanol in the experiment, especially as I planned to heat it. As ethanol is flammable, I could not heat it with a naked flame, due to obvious fire risks.

A GRAPH TO SHOW THE RELATIONSHIP

One factor that my sensor does have a slight problem with is response time. The voltmeter display doesn’t react quickly to quick changes in temperature, so my sensor would have to be used to measure a slow rise in temperature. This did lead to a small inaccuracy in my results, as the difference between the potential differences across the thermistor between 20° and 25°C is actually bigger than the gap between 15°C and 20°C. This is because this is the area in which the temperature of the ethanol increased at the fastest rate and the voltmeter reading struggled to keep up with the temperature rise, despite my attempts to heat the ethanol slowly. However, the calibration graph allowed me to discount this small area by leaving this point out whilst drawing the curve, but it is still clear that my sensor would be most effective at measuring small temperature increases over time.

The good qualities my sensor has involved an excellent sensitivity at lower temperatures, and could measure very small changes. The calibration curve has been constructed using three experiments averaged out, so any noise or random fluctuations which may have affected my sensor have been effectively eliminated, so the temperature could be calculated quite accurately.