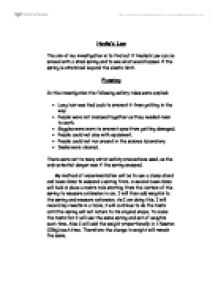 To find out if Hooke&amp;#146;s Law can be proved with a steal spring and to see what would happen if the spring is stretched beyond the elastic limit.

The aim of my investigation is to find out if Hooke’s Law can be proved with a steal spring and to see what would happen if the spring is stretched beyond the elastic limit.

In this investigation the following safety rules were applied:

There were not to many strict safety precautions used, as the only potential danger was if the spring snapped.

My method of experimentation will be to use a clamp stand and boss clamp to suspend a spring from. A second boss clamp will hold in place a metre rule starting from the bottom of the spring to measure extension in cm. I will then add weights to the spring and measure extension. As I am doing this, I will record my results in a table. I will continue to do the tests until the spring will not return to its original shape. To make the tests fair I will use the same spring and set of weights each time.

My results are meaningful as they support my objective. I placed them in a table to make them easier to identify.  I did not need to take repeat readings, as I found them reliable andaccurate when I noticed that the spring started to follow a pattern

If the experiment were to be carried out again, changes could be made to reduce experimental error. The ruler suspended by the spring could have been set vertically by using a plumb line. Also a pointer on the spring would help in gathering the information more accurately. If the measurements were to be taken even more precisely then an ultra sonic measuring device could be used to measure the extension to a very accurate degrees.  However, my results are reasonably reliable as all of them were very close to the line of best fit.

I do consider my results good enough evidence to support my conclusion as most of them followed a steady pattern and showed that if you stretch something with a steadily increasing force, then the length will increase steadily too. Some of my results were anomalous as when they were approaching the elastic limit the results started increasing in different amounts.

If I would carry on with my experimentation, I would find out what happened after the limit of proportionality had been reached using Hooke´s law, achieving results until the spring became straight and eventually breaking. However the change in length at this stage is very small and special measuring equipment would be needed in order to conduct a reasonable experiment.