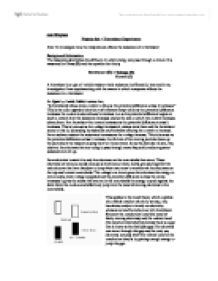 To investigate how the temperature affects the resistance of a thermistor.

Aim: To investigate how the temperature affects the resistance of a thermistor

The resistance determines the difficulty in which energy can pass through a circuit. It is measured in Ohms (Ω) and the equation for this is;

A thermistor is a type of variable resistor that’s resistance is affected by heat and in my investigation I am experimenting with the manor in which temperate affects the resistance in a thermistor.

In Physics by Patrick Fullick it states that;

In an ordinary resistor the resistance increases as the voltage increase. This is because as the potential difference across it increase, the friction of the moving particles heats up the particles in the resistor causing them to vibrate more. So as the particles vibrate, they obstruct the electrons that are trying to pass through more frequently and so a greater resistance is built up.

In an electrical current it is only the electrons on the outer shells that move.

I decide that the range of my data should be from 100C-400C in intervals of 50C because this gives me a range of seven pieces of data which is enough needed to prove my theories for this investigation and anymore would not be a constructive use of time but any less may not be enough to show the relationship properly. I think that 100C is a good temperature to start with because it will not take to longer time to reach that temperature but it is a still a temperature below the average room temperature and so I can show that the resistance also changes when you lower the temperature as well as increase it. I also think that 400C is a suitable temperature to stop heating the thermistor at because I will already have a good range of data that fits well into the time that I have to do this experiment and also once u begin to heat oil above about 500C it becomes a safety hazard.

The results of my preliminary experiment were as follows;

These results seem to follow what I have already predicted which is that the resistance decreases in a thermistor as the heat increases. I decide to record my data in ohm rather than any other (for example kilo ohms) because this gave the best accuracy of numbers and I thought it better to work in hole numbers rather than decimals. I found that the best way to decrease the temperature of the thermistor is to put ice in the water bath and wait for the temperature to drop so this is what I am going to do and then from 100

I would also have like to have obtained a wider range of data because I did not think about the consequences of getting anomalies I think the number of results I needed to obtain should have been more. To improve this I would begin by measuring the resistance of the thermistor at 00C to emphasis the rapid decrease in resistance that I have in the start of my results and to see if 00C is the point of infinite resistance for a thermistor. I would always go on to obtain the resistance from temperatures a lot higher than 400C but in doing this I would have to take a lot more safety precautions because, past a certain temperature, oil becomes quite dangerous to heat. If I did this I would be a definite improvement on my result because it would mean that I could investigate further on the behaviour of a thermistor and try to find out at what temperature the thermistor I was using reaches no resistance or the point at which the resistance across it stops decreasing.

Apart from these points I think my method in my experiment was effective and allowed me to obtain my results safely without too many faults. The units in which I recorded my results were correct and showed the results of the data I collected clearly so if I was to do it again then I would keep the method and units in which I measure the temperature and resistance the same; only changing some of the equipment so that the data could be more accurate.