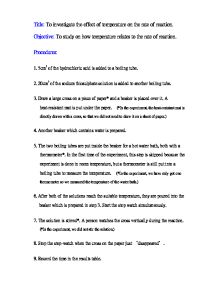 To investigate the effect of temperature on the rate of reaction

Title: To investigate the effect of temperature on the rate of reaction. Objective: To study on how temperature relates to the rate of reaction. Procedures: 1. 5cm3 of the hydrochloric acid is added to a boiling tube. 2. 20cm3 of the sodium thiosulphate solution is added to another boiling tube. 3. Draw a large cross on a piece of paper* and a beaker is placed over it. A heat-resistant mat is put under the paper. (*In the experiment, the heat-resistant mat is directly drawn with a cross, so that we did not need to draw it on a sheet of paper.) 4. Another beaker which contains water is prepared. 5. The two boiling tubes are put inside the beaker for a hot water bath, both with a thermometer*. In the first time of the experiment, this step is skipped because the experiment is done in room temperature, but a thermometer is still put into a boiling tube to measure the temperature. ...read more.

The reaction rate-temperature table is drawn below: Temperature (?) 23 35 45 54 65 Rate of reaction (1/time taken to bloat out the cross s-1) 0.00997 0.017513 0.027174 0.042373 0.060606 As you can see, the reaction rate and the temperature are proportional. Reaction rate rises more when temperature increases. Discussion: There are some points to note in this experiment. For example, some errors occurred during the experiments. First, some heat is lost to the surroundings. It is inevitable but we can try to reduce the heat loss by wrapping the beaker with cotton wool. Unfortunately, we are not provided with this material. Second, the temperature of the water bath is measured. We put the thermometer into the water bath instead of the boiling tubes which contain the reactants, this leads to errors on the temperature of the mixture. Transfer of heat from the water to the reactants inside the boiling tubes needs time. ...read more.

So the milk goes bad. Normally, we will put opened milk in the refrigerators. As the temperature is low in the fridge, bacteria become inactive and thus the reaction rate which takes place inside the milk is very low. This can prevent the milk from going bad and prolong its storage time. This is why people often put opened milk in the fridge, and there are labels on the box of milk telling us avoid putting it under sunlight. Conclusion: In this experiment, we have found that the time of reaction is inversely less proportionate with the temperature of the reactants. As the temperature increased, the less the reaction time is required. The reaction rate was calculated by the reciprocal of reaction time a graph is plotted against temperature. It is not difficult to find out they are proportional, though it was not directly. From this experiment, we can conclude that when the concentration and quantity of the reactants are the same, the higher the temperature, the faster the reaction rate. The latter increase more as temperature increases. ?? ?? ?? ?? ...read more.