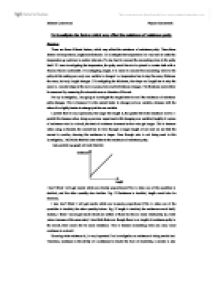 To investigate the factors which may affect the resistance of resistance putty.

There are three different factors, which may affect the resistance of resistance putty. These three factors are temperature, length and thickness. To investigate the temperature it is very hard to make the temperature go up/down in certain intervals, it’s also hard to connect the connecting wires to the putty itself. If I were investigating the temperature, the putty would have to be placed in a water bath with a Bunsen Burner underneath. If investigating length, it is easier to connect the connecting wires to the putty whilst making sure only one variable is changed i.e. temperature has to stay the same, thickness the same, but only length changes. If investigating the thickness, the shape and length has to stay the same i.e. rounded shape at the end or square, but only the thickness changes. The thickness could either be measured by measuring the circumference or diameter of the end.

For my experiment I need to make it as fair a test as possible. To try to do this, only one variable will be changed (length, not the width nor temperature). Therefore, the width of the resistance putty has to be checked regularly to make sure that it is the same throughout. The temperature also has to stay the same, this can be done by keeping the voltage low so that the putty doesn’t heat up. The rest of the circuit which is going to be used also needs to stay the same, this involves being careful when disconnecting the resistance putty from the circuit and replacing the resistance putty back in.

The apparatus which is going to be needed/used, are 3 cells, ammeter, voltmeter, crocodile clips x 2, scalpel, coins x 2, resistance putty, connecting wires, pair of plastic gloves, and a tray lined with plastic. Some of this apparatus is used to keep ourselves/area clean, the others are to be set up in the circuit as shown.

The two coins are pressed into the putty at either end, then the crocodile clips attached to the coins. This is to prevent the error of changing another variable (width) by accident.

The range to be used is going to be from 20cm to 6cm and in intervals of 2cm each time. This results in taking 8 readings all together.

To ensure the experiment is carried out safely, the scalpel (which is used to cut the resistance putty) will only be held when it is needed, otherwise it remains on the bench. The experiment is not going to

There is also only one point on the graph, which is away from the best-fit line. This could be because I was not being accurate enough with having exactly 8cm of resistance putty and having the width exactly the same as with all the other different lengths. It could also be because for this length, there wasn’t such a good connection to the putty from the circuit or the current was not accurate enough. This could be due to the readings constantly fluctuating and the current reading being too small.

To make my conclusion more valid, more experiments could be done. If I had more time, I would have investigated these too, so I could get a more valid conclusion.

These experiments would still involve changing just one variable, but instead of having a constant width of 2cm in diameter, the constant width could be 5cm in diameter instead. Or, instead of having a constant temperature of 15°C, a constant temperature of 20°C could be used whilst only varying the length. Even though different resistance values could be calculated, the graph drawn should resemble the same shape as that of the other graphs where only the length is varied for a piece of resistance putty. If this does happen, then it can be safely concluded that my conclusion and results were accurate. But until then it is very difficult to tell whether they are or not.