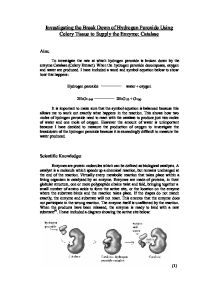 Investigating the Break Down of Hydrogen Peroxide Using Celery Tissue to Supply the Enzyme: Catalase Aim: To investigate the rate at which hydrogen peroxide is broken down by the enzyme Catalase (Celery Extract). When the hydrogen peroxide decomposes, oxygen and water are produced. I have included a word and symbol equation below to show how this happens: Hydrogen peroxide --- water + oxygen 2H2O2 (aq) --- 2H2O (l) + O2 (g) It is important to make sure that the symbol equation is balanced because this allows me to work out exactly what happens in the reaction. This shows how two moles of hydrogen peroxide need to react with the catalase to produce just two moles of water and one mole of oxygen. However the amount of water is unimportant because I have decided to measure the production of oxygen to investigate the breakdown of the hydrogen peroxide because it is exceedingly difficult to measure the water produced. Scientific Knowledge: Enzymes are protein molecules which can be defined as biological catalysts. A catalyst is a molecule which speeds up a chemical reaction, but remains unchanged at the end of the reaction. Virtually every metabolic reaction that takes place within a living organism is catalysed by an enzyme. Enzymes are made of proteins, in their globular structure, one or more polypeptide chains twist and fold, bringing together a small number of amino acids to form the active site, or the location on the enzyme where the substrate binds and the reaction takes place. If the shapes do not match exactly, the enzyme and substrate will not react. This ensures that the enzyme does not participate in the wrong reaction. The enzyme itself is unaffected by the reaction. When the products have been released, the enzyme is ready to bind with a new substrate(a). I have included a diagram showing the active site below: (1) Enzymes are among the most powerful catalysts, and play an essential role in living organisms, where they accelerate reactions that would otherwise require temperatures that would destroy most of the organic matter. ...read more.

These measurements allow me to decrease the concentration of the enzyme solution whilst keeping the volume at a steady figure. I have included a table to show my quantities of dilution to make it clearer and easier to understand what I will be doing: Table of dilutions to show the concentrations of the catalase solution I shall use to mix with varying amounts of distilled water: Volume of catalase solution (cm�) Volume of distilled water (cm�) Total volume when both solutions are mixed together (cm�) 10.0 0.0 10.0 8.0 2.0 10.0 6.0 4.0 10.0 4.0 6.0 10.0 2.0 8.0 10.0 This table clearly states the volumes of solution I will be using and it is made clear that each different dilution of the stock solution adds up to 10.00cm�. I have chosen to use five different concentrations because I feel that this should be enough to give me a good idea of how the reaction rate is affected by the concentration of the solution. I shall be carrying out three preliminary experiments to test how suitable the concentrations that I have chosen are, and also to make sure that the reaction does not happen too fast or slow. Both of these, if the experiment takes too long, would not be suitable because of the limited time that I have to do the tests, and if the reaction was too fast then the accuracy of the experiment could be affected, due to it being difficult to measure accurately. I plan on doing just 3 preliminary experiments due to my lack of time to complete these procedures. I have chosen to use the most concentrated solution (100% enzyme), the middle solution (60% enzyme and 40% water), and finally the weakest concentration (20% enzyme and 80% water). This should give me a good representation of the results I will be getting. I must also decide on the total volume of hydrogen peroxide that is to be added to the enzyme solution in each experiment. ...read more.

I would use the same concentrations as I used for the previous experiment to keep it a fair test, and also add the same amount of hydrogen peroxide. This would be timed for 1 minute and the volume of oxygen produced recorded using a gas syringe. The experiment would be repeated using the 5 enzyme concentrations used for the celery solution. The experiment would be repeated 3 times for each concentration so that the average volume of oxygen produced could be recorded. The rate of reaction would also be worked out, so as to compare the results. This data would be presented on a graph, which could then be easily compared to the reaction rate of the celery solution. From the conclusions drawn from the graph it should be possible to tell whether liver, potato or celery contained more catalase. I would also like to investigate the effect of temperature on the break down of hydrogen peroxide using celery tissue to supply the enzyme, catalase. This would show greater depth into the topic and hopefully provide more conclusive results as to the conditions needed for the optimum yield of the products given off when hydrogen peroxide reacts with catalase. From background research it is possible to discover that a rise in temperature increases the rate of enzyme-controlled reactions; a fall in temperature slows them down. In many cases a rise of 10oC will double the rate of reaction, but above 50oC the enzymes, being proteins, are denatured and stop working. Knowing this, it is possible to compose an experiment which will test if the above information is true for the enzyme, catalase and work out the temperature at which the rate of reaction is highest. Conclusion: From my results I am able to compare the different concentrations, and have come to the conclusion that the rate of oxygen produced is directly proportional to, and is influenced by the decomposition of the hydrogen peroxide by catalase. The predicted graphs were also very similar to the ones that my results produced, proving that my investigation was conducted fairly and effectively. ...read more.