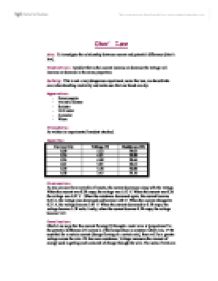 To investigate the relationship between current and potential difference (ohm&amp;#146;s law).

Ohm' Law Aim: To investigate the relationship between current and potential difference (ohm's law). Prediction: I predict that as the current increase or decrease the voltage will increase or decrease in the same proportion. Safety: This is not a very dangerous experiment, never the less, we should take care when handling electricity and make sure that our hands are dry. Apparatus: - Power supple. - Variable resistor - Resistor - Volt meter - Ammeter - Wires Procedure: As written in experimental handout attached. ...read more.

If a conductor obeys Ohm's Law, the current will increase in proportion to the voltage. If you double the voltage, the current will also double. If we divide the voltage over the current, we are suppose to get the same number. Evaluation: We should make sure that we turn of the power supply off when we are not taking readings, so that are results are accurate and abbey ohm's law. If the temperature increase, the resistance tend to increase and so we will get a curve not a straight line. To make this experiment more interesting, we could have repeated the experiment more times using more resistors. ...read more.