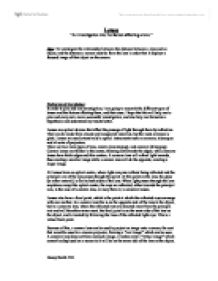 To investigate the relationship between the distance between a lens and an object, and the distance a screen must be from the lens in order that it displays a focused image of that object on the screen.

“An investigation into the factors affecting a lens.”

Aim: To investigate the relationship between the distance between a lens and an object, and the distance a screen must be from the lens in order that it displays a focused image of that object on the screen.

In order to plan and my investigation, I am going to research the different types of lenses and the factors affecting them, and their uses. I hope that this will help me to plan and carry out a more successful investigation, and also help me formulate a hypothesis and understand my results better.

Lenses are optical devices that affect the passage of light through them by refraction. They can be made from almost any transparent materials, but the most common is glass. Lenses are used extensively in optical instruments such as cameras, telescopes and all sorts of projectors.

There are two main types of lens, convex (converging), and concave (diverging). Convex lenses are thicker in the centre, thinning out towards the edges, while concave lenses have thick edges and thin centres. A concave lens will refract light inwards, thus creating a smaller image while a convex lens will do the opposite, creating a larger image.

All lenses have an optical centre, where light can pass without being refracted and the principal axis of the lens passes though this point. At this point on the lens, the glass (or other material) is flat on both sides of the lens.

Prediction: I can use the following formula, which relates to my hypothesis, to generate a set of predicted results for my experiment. This is a quantitative prediction:

v =  the distance between the lens and the image.

f =  the focal length of the lens.

u = the distance between the lens and the object.

In order to use this formula I need to know the values of f and u. For between the lens and the object I will use the lengths listed below– these are the u values for this experiment. I know the focal length of my lens, 10cm – this is my f value.

Using the formula I gained the following predicted v values for a lens with a focal length of 10cm, using the u values shown above.

Using these forecast results, I will now plot a graph comparing the u value with the v value.

This graph shows a smooth curve, demonstrating a negative correlation between the length of u and that of v. This supports my hypothesis. I will now conduct an experiment to investigate my theory further.

Method: I will set up equipment as shown above and then adjust the distance between the screen and the lens until the image shown on the screen is as clear as possible.

I will record the v

Although I took care to blackout the room I was working in, the light intensity could still vary, both in the background light and also in the light source. I could use a darkroom and light sensors to measure the amounts of light at various points and to make sure that they are all zero. I could also use a sensor to measure the level of light emitted from the source and have a computer automatically adjust it so that the level is constant. A good quality bulb and a steady controlled power source would also be necessary to prevent varying light intensity from the source. Laser light could also be used and would be easier to measure and with computer instruments.

Despite this scope for inaccuracies, the investigation turned up no anomalies and the quality of the evidence is good. I think that the evidence gained from this supports both my hypothesis but the experiment could be repeated with better equipment (mentioned above) and a wider range of lengths. I could also repeat the experiment varying the angle of the lens, and the focal length of the lens to see if they have an effect on the images produced and if so, what the effects are.