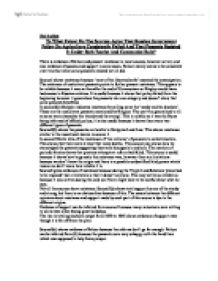 There is evidence of failure and peasant resistance in most sources, however not all, and also evidence of success and support in some cases. Failure mainly seems to be consistent over time but while some peasants resisted not all did.

Source1 shows resistance because ‘most of the liberated serfs’ resented the emancipation. The existence of recalcitrant peasants points to further peasant resistance. This appears to be reliable because it was written after the end of Communism so Hingley would have had access to Russian archives. It is useful because it shows that policy failed from the beginning however it generalises the peasants into one category and doesn’t show that some peasants benefited.

In source2(a) Stolypin indicates resistance by calling some the ‘needy and the drunken’. These are the recalcitrant peasants mentioned by Hingley.

Source6 gives evidence of resistance because during the Virgin Land Schemes ‘plans had to be imposed’ but a limitation is that it doesn’t say how. This may not be as reliable as because it was written during the cold war Nove might have to be careful about what he says.

Not all the sources show resistance. Source2(c) shows total support by one of the sturdy and strong, but there is an obvious bias because of this. The reason between the different opinions about resistance and support made by each part of this source is due to the different origins.

Evidence of support can be inferred from source4 because many volunteers were willing to work even when facing great hardships.

The rise in total agricultural output from 1958 to 1965 shows evidence of support even though it is far off from the plan.

Source2(a) shows evidence of failure because the reforms don’t go far enough. Failure can be inferred from (b)

Some evidence of failure can be inferred from source3 because of the mass resistance of the peasants which shows that collectivisation didn’t do for the peasants what was necessary.

Source2(c) has evidence of success because some peasants supported policies.

Some success is shown by Stalin in source3 because collectivisation increased the food supply.

Further evidence of success is shown in source4 because of the mind change towards peasants because Khrushchev tried to put them as his main priority.

Overall the sources agree that most tsarist and communist agricultural policies failed to help the peasants. However most had some successes such as the peasant support shown in source 2a. There was also agreement that the peasants resisted these policies however it was not a total resistance as there was also evidence of support. This shows the peasants can’t be generalised into one category.