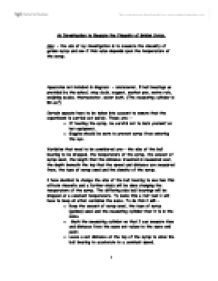 An Investigation to Measure the Viscosity of Golden Syrup.

Aim: - the aim of my investigation is to measure the viscosity of golden syrup and see if this value depends upon the temperature of the syrup.

Certain aspects have to be taken into account to ensure that the experiment is carried out safely. These are: -

Variables that need to be considered are:- the size of the ball bearing to be dropped, the temperature of the syrup, the amount of syrup used, the length that the distance travelled is measured over, the depth beneath the top that the speed and distance are measured from, the type of syrup used and the density of the syrup.

I have decided to change the size of the ball bearing to see how this effects viscosity and a further study will be done changing the temperature of the syrup. The differing size ball bearings will be dropped at a constant temperature. To make this a fair test I will have to keep all other variables the same. To do this I will:-

To measure the viscosity of golden syrup I will need to measure the radius of the ball bearing as this can be used in the formula 4/3 Πr3   multiplying it by gravity and then the density of steel to calculate the weight of the ball bearing and calculate the downward force on the object. This came about as m=ρV and W=mg. Substituting in W= ρVg. The volume of a sphere = 4/3Πr3. Substituting in again, W=4/3Πr3ρsteelg.

However, there is more than this acting on the ball bearing. Viscous drag is a force opposing the weight of the object and this is calculated by using Stokes’ law. F=6ΠrηV.

Also, in an upwards direction is upthrust. This is calculated by the amount of the material displaced. As this is spherical (the ball bearing) this can be calculated by the formula W=mg. As m=ρV and V=4/3Πr3 upthrust can be written as 4/3Πr3ρsyrupg.

Putting all of these formulas in the same equation, depending on which direction they are acting you get to the equation: -

This is quite a lengthy equation and can be cancelled down to: -

This can be used to plot a graph.

To analyse my results I will plot a scatter graphs for each temperature plotting velocity against the radius squared.

This can be shown by the equation calculated earlier: -

The gradient of the line of best fit can then be used to calculate the viscosity of syrup.

So, I will have to take measurements of the radius of the ball bearings, the density of syrup using ρ=m/V and the velocity of the ball bearing. The density of the syrup can be found by putting a set volume of syrup (50cm3) in a pre-massed measuring cylinder and then re-massing the cylinder with syrup after. The change in mass will give the mass of the syrup. The density will vary at different temperatures so will have to be measured at each temperature. These can be used to calculate the density. The density of steel is 7850 kgm-3. The velocity can be found by speed = distance/time. So I will need to measure the time it takes the ball bearing to travel 10 cm down the measuring cylinder.

Using the measuring cylinder to measure the volume of syrup can be measured to the nearest ±2ml. To do this accurately you must be at eye level with the top of the syrup and it must be within the scale of the measuring cylinder. The mass of the syrup is measured using weighing scales that measure to ±0.005 g.  The radius of the ball bearing can be measured to the nearest ±0.00001m using a micrometer. They will all be measured twice to ensure accuracy in the measurement and the micrometer must be placed across the diameter of the sphere. The distance travelled by the ball bearing, 0.100 metres will be measured by a metre rule between two lines on the measuring cylinder. A meter rule can be sensitive to the nearest ±0.0005m. This value will be measured twice if the same and thrice if not so to ensure accuracy in the reading. The ball bearing must be allowed time to accelerate to its terminal velocity in the syrup so the distance will start 0.030 metres below the top of the syrup. The time will be measured using a stop clock which is sensitive to the nearest 0.005 seconds. However, when using a stop clock human error comes into the equation when both starting and stopping the clock. This value will be close to ±0.5 seconds if both ends of the measuring cylinder are considered. To ensure that these readings are accurate you must be at eye level with the lines on the cylinder for the time, and the distance on the meter rule. The temperature of the syrup, especially at 40ºC, will vary as when it is taken out of the water bath it immediately looses heat. The water bath is also at just above 40ºC; somewhere around 45ºC. This gives a sensitivity reading of the temperature of the syrup to ±5ºC. All of the above must be measured accurately.

As, the syrup heats up, the number of collisions will increase which will increase viscous drag, but this is outweighed by the weakening in bond strength as the temperature increases. The syrup will become runnier and the ball bearing should pass smoother through the syrup as the density will have decreased.

After reviewing the experiment there was numerous modifications that I had to make from my original plan. These are: -

If I were to complete the investigation again and there were numerous resources that I could use there are a number of modifications that I would make: -

This is a 4-5 star piece of work. It has an excellent plan and lots of detail. The results are excellent and the calculations are very detailed considering all possible sources of error and calculating error as well. Overall lots of detail and scientific understanding displayed here but I feel parts of it could be clearer. It would be good to see worked calculations in some examples to show clearly steps of the process because there is a lot going on in this experiment. Overall very good work.