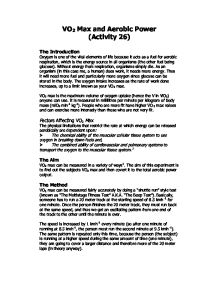 VO2 Max and Aerobic Power (Activity 26) The Introduction Oxygen is one of the vital elements of life because it acts as a fuel for aerobic respiration, which is the energy source in all organisms (the other fuel being glucose). Without energy from respiration, organisms simply die. As an organism (in this case me, a human) does work, it needs more energy. Thus it will need more fuel and particularly more oxygen since glucose can be stored in the body. The oxygen intake increases as the rate of work done increases, up to a limit known as your VO2 max. VO2 max is the maximum volume of oxygen uptake (hence the V in VO2) anyone can use. It is measured in millilitres per minute per kilogram of body mass (mlO2 min-1 kg-1). People who are more fit have higher VO2 max values and can exercise more intensely than those who are not very fit. Factors Affecting VO2 Max The physical limitations that restrict the rate at which energy can be released aerobically are dependent upon: > The chemical ability of the muscular cellular tissue system to use oxygen in breaking down fuels and, > The combined ability of cardiovascular and pulmonary systems to transport the oxygen to the muscular tissue system.1 The Aim VO2 max can be measured in a variety of ways1. The aim of this experiment is to find out the subjects VO2 max and then covert it to the total aerobic power output. The Method VO2 max can be measured fairly accurately by doing a "shuttle run" style test (known as "The Multistage Fitness Test" A.K.A. "The Beep Test"). Basically, someone has to run a 20 meter track at the starting speed of 8.5 kmh-1 for one minute. Once the person finishes the 20 meter track, they must run back at the same speed, and thus we get an oscillating pattern from one end of the track to the other until the minute is over. ...read more.

Total Distance Covered During a Speed = 20 m x Integer ? of Laps Column [7] = 20 m x Column [5] Column [8] Column [8] is the cumulative distance ran. Here, the distances are added up (accumulated) so that we know the total distance ran through the whole activity. The cumulative distance is the total of the previous distances (previous speeds) plus the distance of the current speed. Column [9] Column [9] is the cumulative time taken for the activity. It is in seconds and works in pretty much way as Column [8], i.e. the times of the previous runs are added to the current run to give the total cumulative time. Column [10] This is the cumulative time presented in a more familiar and user friendly format, the minute : second style. This is just here to give a sense of how long 840 seconds are. The Tape (or The Slideshow) In order to make the subject run at the times listed on the Table, I will need to prepare a tape or some sort of timing device. After attempting to make a tape and failing miserably, I decided to use Microsoft PowerPoint(r) instead (making the tape proved to be a long winded, boring and fruitless exercise), because, with PowerPoint, I can set time intervals between slide transitions and add sounds on every slide transition, making it a visual as well as an aural aid and I can have a lot more fun making it! (i.e. I can have lots of "interesting" and slightly odd sounds on the slide show) I also realised that it would be more helpful (to the subject) if I had a sound in the middle of each lap and to have a marker on the middle of the lap (10 meters). In case the subject is going too slowly and doesn't reach the middle marker when the middle bleep sounds, they can speed up to reach the end of the lap in time. ...read more.

The distance is the speed multiplied by the time i.e. the area under the graph. A As mentioned earlier, the energy needed to propel a subject can be calculated via the kinetic energy equation. EK = 1/2mv2 and P = ?E/?t My mass is 85 kg. If I ran one lap at 8.5 kmh-1 (which is 2.36 ms-1, Refer to Table 1), the energy needed is: EK = 1/2mv2 so, EK = 1/2 x 85kg x (2.36ms-1)2 EK = 236.7 J If the above amount of energy were delivered by my muscles in one lap (10 meters, since that was the length each subject had to run) at 8.5 kmh-1, it would have taken 8.47/2 seconds (only half a lap, 10 meters). So: P = ?E/?t P = 236.7/4.235 P = 55.9 Js-1, W However, if I ran 20 meters, then the power is: P = 236.7/8.47 P = 27.9 Js-1, W The amount of energy accumulated while running a lap is then dissipated towards the end (of each lap) as the subject must come to rest i.e. the velocity is zero. Notice also that because the subject has to accelerate at the beginning of every lap, some extra energy is needed for that acceleration. The subject must accelerate every 10 meters because he/she has stop and then run in the opposite direction. As the lap distance decreases, the power transfer increases. This shortage (of lap distance) will also cause the subject to accelerate and decelerate more often. Therefore, the smaller the lap distance, the larger the error could be (due to the fact that some of the energy is used up in accelerating). Using a 10 meter track instead of a 20 meter track could have affected the results because this meant more energy used in accelerating. It is therefore, justifiable to say that had the track been longer (i.e. 20 meters), myself and all of the other subjects could have been able to sustain a higher speed instead of the one that was achieved. ...read more.