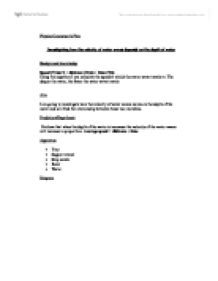 I am going to investigate how the velocity of water waves varies on the depth of the water and will find the relationship between these two variables.

I believe that when the depth of the water is increases the velocity of the water waves will increase in proportion. Average speed = distance ÷ time

The only variables of this experiment are to be:

The quantites which will remain constant are:

To ensure a fair experiment, I will record my results 3 times. This will also increase the reliabilty of my results.

During the experiment there were a few factors that could have potentially affected the results:

1. The waves curved at edges which means not all of the wave reached the end of the tray at the same time.

2. When I increased the depth of the water a small amount of the water spilled over the side after the tray was dropped.

directly proportional to the velocity squared only as proven satisfied pass the origin.

The straight line shows that wave velocity increases proportionally with √Depth. Where there is a greater depth of water, the water has a greater mass and so, by conservation of energy, when it has a higher mass and height it will have a greater kinetic energy when dropped.

The increase in velocity begins to slow down with a greater depth as it has a greater surface area in contact with the tray; therefore, there is a greater amount of friction. The greater the friction, the quicker the kinetic energy decreases.

If I were to carry out this experiment again, I would make the following improvements/changes:

A graph would definitely improve this report but the general approach to gathering data makes sense on first reading. The results are consistent with theory. Some further comments about uncertainties with the timing and measurement of depth could have been included. Overall a good report but missing key information. 3 stars