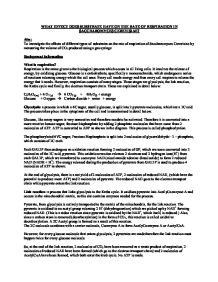 WHAT EFFECT DOES SUBSTRATE HAVE ON THE RATE OF RESPIRATION IN SACCHAROMYCES CEREVISIAE?

WHAT EFFECT DOES SUBSTRATE HAVE ON THE RATE OF RESPIRATION IN SACCHAROMYCES CEREVISIAE? Aim: To investigate the effects of different types of substrates on the rate of respiration of Saccharomyces Cerevisiae by measuring the volume of CO2 produced using a gas syringe Background information What is respiration? Respiration is the name given to the biological process which occurs in all living cells. It involves the release of energy, by oxidising glucose. Glucose is a carbohydrate, specifically a monosaccharide, which undergoes a series of reactions releasing energy which the cell uses. Every cell needs energy and thus every cell respires to release the energy that it needs. However, respiration consists of many stages. These stages are glycolysis, the link reaction, the Krebs cycle and finally, the electron transport chain. These are explained in detail below: C6H2O6(aq) + 6 O2 (g) --> 6 CO2 (g) + 6H2O(l) + energy Glucose + Oxygen --> Carbon dioxide + water + energy Glycolysis: a process in which a 6C sugar, usually glucose, is split into 2 pyruvate molecules, which are a 3C acid. The process takes place in the cytoplasm of the cell and is summarised in detail below. Glucose, like many sugars is very unreactive and therefore needs to be activated. Therefore it is converted into a more reactive hexose sugar, fructose bisphosphate by adding 2 phosphate molecules that have come from 2 molecules of ATP. ATP is converted to ADP as shown in the diagram. This process is called phosphorlyation. The phosphorylated 6VC sugar, Fructose Bisphosphate is split into 2 molecules of glyceraldehyde - 3 - phosphate, which consists of 3C each. Each GAL3P then undergoes an oxidation reaction forming 2 molecules of GP, which are soon converted into 2 molecules of the 3C acid, pyruvate. This oxidation reaction releases 2 electrons and 2 hydrogen ions (H+) from each GAL3P, which are transferred to coenzyme NAD (nicotinamide adenine dinucleotide) ...read more.

I am assuming that the break down of maltose will take up a lot of time and all the maltose will not have been used up by the end of the experiment. For if it had been, the volume of CO2 produced by saccharomyces cerevisiae would have surely been a lot higher than that of glucose since it is made up of more glucose molecules i.e. has a larger Mr. The fourth substrate to cause saccharomyces cerevisiae to produce the next largest volume of CO2 per unit time i.e. the substrate to have the next fastest rate of respiration, I predict, will be sucrose. This is because, like maltose it as a disaccharide and needs to be digested before absorption. So the digestive enzyme, sucrase will be released by the saccharomyces cerevisiae. This enzyme will hydrolyse sucrose in exactly the same way that the maltase hydrolyzes maltose. The end products of hydrolysis of the sucrose will be two monosaccharides; one molecule of fructose and one of glucose and a by-product, which is water. Since the cell membrane of the saccharomyces cerevisiae I assume, has both glucose and fructose carrier proteins, the products can easily be taken in by facilitated diffusion. However, since there are more carrier proteins for glucose than fructose, the rate of facilitated diffusion of glucose will be much faster than that of fructose hence glucose will be oxidised first. Again, there will be no respiration whilst sucrase is being released into the solution and the products of hydrolysis are being absorbed by facilitated diffusion. Once facilitated diffusion begins, respiration will also begin and the rate of CO2 production will begin to increase. Overall, in a given time, the amount of CO2 produced will be much lower compared to the above substrates since the disaccharides needs to be digested first, which will take up some time and then be absorbed. Absorption takes longer with the substrate sucrose than maltose since sucrose breaks into glucose and fructose, which have few carrier proteins to transport theses substances into the cell. ...read more.

On the other hand, if there is a lot of overlap, I can assume that there is no significant difference in the volume of CO2 produced by the 2 substrates and that any differences are simply due to chance. So as the amount of overlap between the histograms increases, the level of certainty of there being a significant difference are due to chance, increases too. For all those graphs that overlap, I will do a t-test to test how certain I am, whether the difference between the mean values for the data is significant or simply due to chance. To calculate the t-value, the formula is: I will have obtained a t-test value from the formula. It will then be compared to the value of tin a table. In order to compare our value we need to first choose a probability that we are going to use to calculate the number of degrees of freedom. A probability of 5 % is commonly used, and I believe is sufficient. Degrees of freedom for the test is simply "the sum of the number of measurements in both groups - 2". For both substrates, I have 15 readings, our degree of freedom is (15+15) = 30 - 2 =28. Finally, I will compare my t value to that found on the t table for 28 degrees of freedom and a probability of 0.05. If my t value is greater than that on the table, the null hypothesis is rejected and I can concluded that there is a significant difference in the volume of CO2 made by the two substrates, hence the rate of respiration. But if my t value is less than that on the table, the null hypothesis is accepted and I conclude that there are null differences in the volume of CO2 produced by the two substrates and so substrates do not affect the rate of respiration. Any differences are due to chance or instrumental inaccuracies. ...read more.