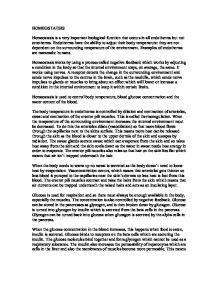 Homeostasis is a very important biological function that occurs in all endotherms but not ectotherms. Endotherms have the ability to adjust their body temperature: they are not dependent on the surrounding temperature of the environment. Examples of endotherms are mammals: humans.

Homeostasis works by using a process called negative feedback which works by adjusting a condition in the body so that the internal environment stays, on average, the same. It works using nerves. A receptor detects the change in the surrounding environment and sends nerve impulses to the centres in the brain, such as the medulla, which sends nerve impulses to glands or muscles to bring about an effect which will lower or increase a condition in the internal environment to keep it within certain limits.

Homeostasis is used to control body temperature, blood glucose concentration and the water content of the blood.

The body temperature in endotherms is controlled by dilation and contraction of arterioles, sweat and contraction of the erector pili muscles. This is called thermoregulation. When the temperature of the surrounding environment increases the internal environment must be decreased. To do this the arterioles dilate (vasodilation) so that more blood flows through the capillaries next to the skins surface. This means more heat can be released through the skin as the blood is closer to the upper dermis of the skin and escapes by radiation. The sweat glands secrete sweat which can evaporate from the skin and so takes heat away from the skin and the skin cools down as the water in sweat needs heat energy in order to evaporate. The erector pili muscles also relax so that hair on the skin lies flat which means that air isn’t trapped underneath the hair.

When the body needs to warm up no sweat is secreted as the body doesn’t need to loose heat by evaporation. Vasoconstriction occurs, which means that arterioles gets thinner so less blood is pumped to the capillaries near the skin’s dermis so less heat is lost from this blood. The erector pili muscles contract and raise the hairs from the skin which means that air currents can be trapped underneath the raised hairs and acts as an insulating layer.

When the glucose concentration in the blood increases, this happens when food is eaten, insulin is secreted. Glucose binds to receptors on the beta cells which are secreting the insulin. The glucose molecules bind together and form glycogen which cannot be used as a respiratory substance. The insulin also increases the permeability of hepatocytes which are cells in the liver and also the membranes of muscles become more permeable. This means that more of the glucose in the blood is absorbed into these cells. We often feel as if we have more energy when we have eaten because our muscles have more energy in which to respire and work efficiently. This process is called glycogenesis. We also respire more because of the insulin even if we aren’t using our muscles more. As there is less glucose in the blood the concentration decreases.

However, if we have a fall in blood glucose concentration then the glycogen is broken down into the single glucose units. The glucagon released by the alpha cells in the pancreas binds to receptors on the hepatocytes (the liver cells) and the muscle cells. This activates the enzyme which catalyses the hydrolysis of glycogen, this forms glucose and water. This is a process which is called glycogenolysis. As there is now more glucose as the glucose has been released the blood glucose concentration increases.

Finally, osmoregulaton; water balance. This is very important as we can’t afford for our bodies to become dehydrated, however, if we have too much water it can lead to health problems. It is controlled by the counter current multiplier mechanism which controls the amount of ADH being released by the posterior pituitary gland. ADH stands for anti- diuretic hormone.

When we become dehydrated we need to increase the amount of water in  the blood: in other words we need to stop water loss. The decrease in water is found out from nerves which are sent to the hypothalamus which sends out more signals which means that more ADH is released. The ADH increases the permeability of the collecting duct which means that more water can be reabsorbed from the Loop of Henle and back into the blood. This means that the urine will be more concentrated as the unwanted ions are not accompanied by lots of water. Therefore, less water is lost in the urine and more is stored in the body-less water loss which will increase the water concentration in the blood if water is drank afterwards.

If we have too much water less ADH is released which means that membranes of the collecting duct are not as permeable so that water is kept in the urine, and is lost when the urine is excreted; the urine is dilute. This increases water loss and decreases the water potential of the blood.

In conclusion, homeostasis is very important for the temperature of the body which is very important as if it goes too high enzymes will be denatured, and if too low they will not function at a fast enough rate. It is also used to control blood glucose concentration, without it we would die, diabetics have to take shots of insulin or they would die. Finally, it is used for the control of the water content of the blood, as we don’t have cells walls like plants it is important we keep the water content at an appropriate level.