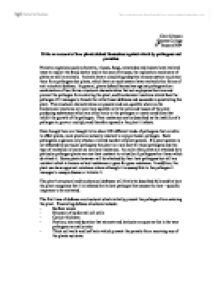 Write an account of how plants defend themselves against attack by pathogens and parasites.

Parasitic organisms such as bacteria, viruses, fungi, nematodes and insects have evolved ways to exploit the food, shelter and in the case of viruses, the replication machinery of plants as well as animals.  Animals have a circulating adaptive immune system to protect them from pathogens but plants, which have no such system have evolved other forms of anti-microbial defence.  In general, plants defend themselves against pathogens by a combination of two forms: structural characteristics that act as physical barriers and prevent the pathogen from entering the plant, and biochemical reactions which face the pathogen if it manages to breach the initial basal defenses and succeeds in penetrating the plant.  The structural characteristics are passive and non-specific where as the biochemical reactions are more host specific with the cells and tissues of the plant producing substances which are either toxic to the pathogen or create conditions that inhibit the growth of the pathogen.  Plant resistance can be described as the inability of a pathogen to grow or multiply and therefore spread in the plant it infects.

Cellular defense structures are characterised by morphological changes occurring in the cell wall.

Pythium and Phytophthora.  Tolerance to disease is the plant’s ability to produce a good crop despite being infected with a pathogen.  The plant achieves this by either lacking receptor sites for the pathogen or by being able to overcome the excretions of the pathogen.

In conclusion plants have many varied mechanisms of basal and induced resistance to parasites and pathogens and an important part of governing this resistance is by plant gene recognition of parasite genes.

Plant-Microbe Interactions: Life and Death at the Interface

The Complexity of Pathogen Defense in Plants